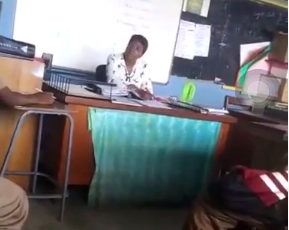 President of the Jamaica Teachers Association, JTA, Owen Speid, says the Pembroke Hall High School teacher implicated in a recent viral video has not been suspended.

Mr. Speid says she’s been given time off from work for reflection and has been receiving counseling with a trained psychologist .

He says he believes the teacher is caring and wants the best for her students but agreed that there was need for her to do some introspection.

Last week, the Principal of Pembroke Hall told our newsroom that since his tenure there has not been any incident of the kind and that the matter was being investigated.

The teacher has been serving the institution for approximately fifteen years.