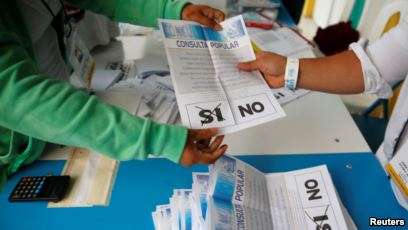 Belizeans have voted in a referendum to take the centuries-old territorial dispute with Guatemala to the International Court of Justice, ICJ.

It was a contentious and emotional journey to election day, which saw 65% of voters turning out.

After a year of intense public debate, and decades of uncertainty, the Belizean people have finally decided to take the issue of Guatemala’s territorial claim to the International Court of Justice, based in The Hague, Netherlands.

The Guatemalans made a similar decision in a referendum last year.

Guatemala has at various times claimed part, half or all of Belize as its territory, dating back to a dispute between the former colonizers, Britain and Spain.

It was at times a bitter divide between the Yes and No campaign.

The Yes side arguing it’s time to put the matter to rest once and for all, and the No side preferring caution, in the event that a ruling at the Hague doesn’t go precisely Belize’s way, as these voters explain.

The Opposition, which had initially obtained an injunction barring the original April referendum date, has since accepted the result.