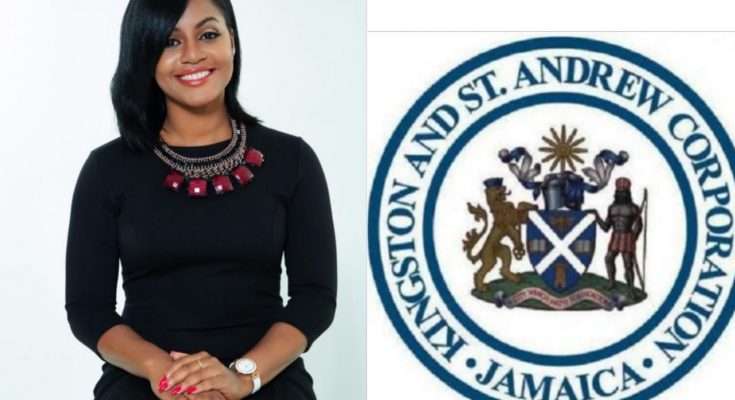 The governing Jamaica Labour Party (JLP) has increased by one (1) its majority in the influential Kingston and St.Andrew Municipal Corporation, the KSAMC.

The increase in majority  for the JLP in the Municipal Corporation comes following a stunning move this morning by Councillor Kari Douglas to walkout of the PNP and join the JLP.  The JLP now has 22 seats in the KSAMC (up from 21), and the PNP’s minority caucas has been reduced to 18.

Miss Douglas, who was the youngest PNP Councillor in the KSAMC and the second youngest in the Corporation, crossed the floor at just after 10:00 this morning shortly after the meeting of the KSAMC was called to order by Corporation Chairman and the Mayor of Kingston, Delroy Williams.

The former PNP  Councillor issued a statement a short while ago which confirmed that she’s walked out of the Peter Phillips-led party and joined the JLP.

Douglas commented – “I hereby confirm that I have elected to leave the PNP to continue serving my country as a member of the Jamaica Labour Party. Consequently, this morning I made the symbolic walk in crossing the political aisle in the KSAMC.”

The former PNP member also delivered a stinging assessment of the state of affairs in the PNP. Councillor Douglas says for sometime, she has been deeply concerned that her former party has become a political organization which is primarily focused on winning elections at any cost, as opposed to pursuing an unswerving commitment to national development and in that process listening to the people and creating policies to meet their needs.

According to Councillor Douglas, her former political party has also for sometime not been a space where creative ideas, especially the thoughts of young people, are encouraged and treated seriously.    She says she has decided that enough is enough.

Councillor Douglas wrote in her statement that honesty dictates that she concedes that given the tribal nature of our politics, her political antecedence and the likelihood that some individuals in her former political party may seek to be vindictive following her announcement  – making the transition across the political aisle was not an easy decision.

But Councillor Douglas says  crucially, she must indicate that given the dynamic leadership with a positive difference that Prime Minister Holness has been able to offer the country and the JLP over the past few years,  she is “certain and in absolutely no doubt” that she has made “the right decision”.

Douglas further lauded Prime Minister Holness. The former PNP member wrote – “there are many people across Jamaica, especially young people who have had a re-awakening of their political views due to the Prime Minister and JLP Leader’s refreshing approach to politics and steering the reigns of Government in a manner which puts the interest of the people first and also is not afraid to hold accountable public officials who step out of line.”

The former PNP member says she’s one of the many who have had to decisively re-think past political ideologies and affiliation. Miss Douglas says today she’s happy to announce that she has made a decision in the interest of her country.

Douglas says she intends to continue practicing the kind of political representation which she always has, that is seeking to secure the interest of the people of Jamaica regardless of their political persuasion or the ‘color’ of their politics.

According to Miss Douglas, even as she remains Councillor for the Trafalgar Division, she “looks forward to making her contribution to the Prime Minister and the JLP’s exciting vision of building a new Jamaica which is prosperous for all.”

It’s understood that Councillor Douglas’ move to join the JLP has sent ripples through sections of the PNP. The PNP Councillor is considered of vintage ‘PNP political stock’ and is a second term Councillor in the constituency of the PNP General Secretary which was also represented in previous years by Easton Douglas.

She recently resigned as a ranking member of the KSAMC’s Building and Planning Committee following alleged pressure from supporters of Dr. Peter Phillips. Douglas had supported Peter Bunting’s unsuccessful challenge to Phillips’ presidency of the PNP

Douglas is the second high profile female member of the PNP to leave the party in recent years and join the labour party. In November 2011, former three term MP for South Central St. Catherine, Sharon Hay Webster, walked out of the then Simpson Miller led-PNP and joined the JLP.