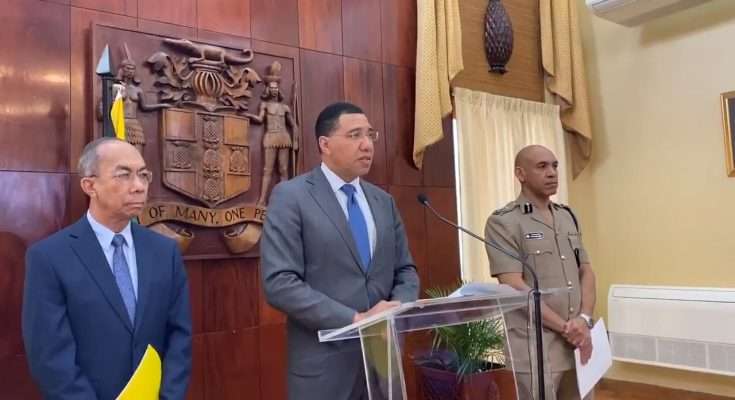 The troubled Kingston East Police Division is now under a State of Public Emergency.

Prime Minister Andrew Holness made the announcement during a media briefing at Jamaica House moments ago.

The Prime Minister says acting on the recommendation of the Heads of the Security Forces, he has advised Governor-General Sir Patrick Allen that a State of Public Emergency is to become effective in the Kingston East Division effective midnight last night.

On the Western side, the boundary extends in a northerly direction from the intersection of Michael Manley Boulevard and South Camp Road, then continues north-easterly along Vineyard Road then on to the end of Diana Drive.

The Northern boundary extends in an easterly direction from Diana Drive to Lexington Avenue, then on to Deanery Road to the intersection to Mountain View Avenue.

The boundary then extends easterly along an imaginary irregular line to the shared parish border of St Andrew and St Thomas.

The Eastern boundary extends in a southerly direction along the shared parish border of St Andrew and St Thomas to the coast.

The Southern boundary extends westerly along the coast of St Andrew, then along the Kingston coastline to the intersection of South Camp Road and Michael Manley Boulevard.

The bloodletting has continued during the first few weeks of the New Year as rival gangs have been waging war over turf.

States of Public Emergency are now in place in sections of seven (7) of Jamaica’s fourteen (14) parishes.

According to data released by the Jamaica Constabulary Force, JCF, since the start of the year, the division has recorded 11 murders, when compared with three murders during the corresponding period last year.

The JCF says of the 11 murders recorded since the start of 2020, seven of them have been attributed to the ongoing gang violence in the division.