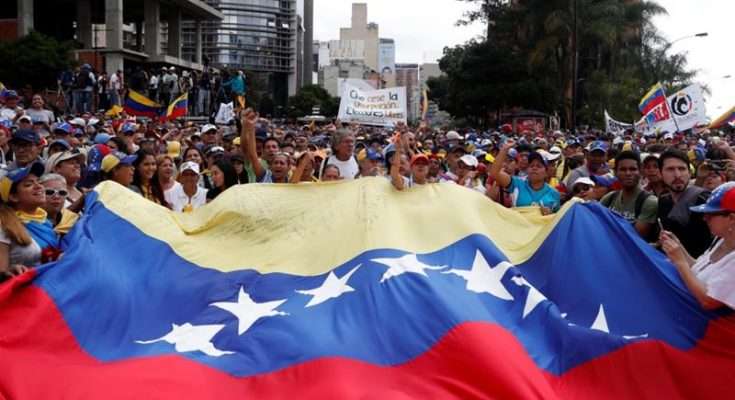 By Dennis BrooksJan 25, 2019, 14:09 pmComments Off on CARICOM Heads Huddle Over Position on Venezuela Crisis

CARICOM Heads of Government are currently meeting via video-conference in a special emergency meeting to address the ongoing situation in Venezuela.

The regional bloc gave the update via social media a short while ago. This, as pressure is mounting on the government of Jamaica to declare whether or not it supports the interim presidency of Venezuela’s Opposition Leader, Juan Guaidó.

Just hours ago two CARICOM Member States, the Bahamas and Haiti, have joined a growing list of countries to recognize Mr. Guaidó as interim president of the troubled South American country.

There’s also at least one Venezuelan activist who’s calling on the government of Jamaica to recognize Juan Guaidó as the Interim President of Venezuela.

Mr. Guaidó swore himself in as Interim President yesterday following massive rival demonstrations in Venezuela’s capital, Caracas, for and against the Nicholas Maduro led-regime.

A Venezuelan activist who’s an attorney-at-law, Francisco Marquez, says supporters of the Opposition are calling on the government of Jamaica to recognize his legitimacy.

The US was the first country to do so yesterday. He says in the coming weeks, Mr. Guaidó will be seeking humanitarian assistance from the countries of the Region.

Meanwhile, Professor of History & Latin American Studies at Pomona College, Miguel Tinker Salas says the present problems facing Venezuelans must be resolved by them and not by what he calls foreign meddling.

This shows a lack of consensus among CARICOM members as to what approach should be adopted regarding Venezuela.

In a statement yesterday, Foreign Affairs Minister, Senator Kamina Johnson Smith, said Jamaica is monitoring the situation and is cognizant of the reaction of other governments.

The PNP is warning that the recognition of Mr. Guaidó could lead to military conflict.
In a statement today the PNP says it notes the developments in the South American country with concern.

Opposition Spokesperson on Foreign Affairs, Lisa Hanna says the recognition of the leader of the National Assembly as interim President is a dangerous precedent which constitutes a grave departure from international practice.

Ms. Hanna says a military conflict could destabilise the Caribbean region which has enjoyed a tradition of peaceful coexistence.

Ms. Hanna says the PNP maintains its strong and principled stance of non-interference in the internal affairs of sovereign States. She says the solution to this situation in Venezuela must ultimately rest with the Venezuelan people.

Ms. Hanna is strongly urging the Government of Jamaica and CARICOM to to mobilise a coalition to offer assistance to the government and opposition in Venezuela to find a peaceful resolution.