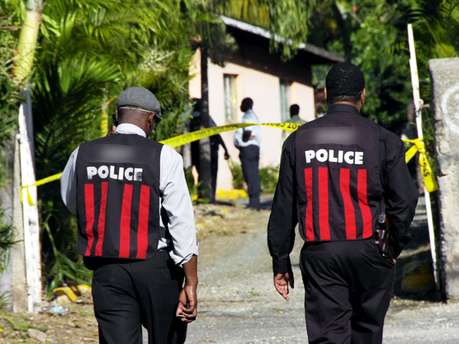 By Kalilah ReynoldsMar 23, 2015, 17:46 pmComments Off on Cheshire Village Residents Angry Over Police Killing

Residents of Cheshire Village in Eastern St. Andrew are livid this afternoon, after police shot and killed a man in his yard yesterday.

The man has now been identified as 22-year-old Akeem Stewart.

Sections of Golding Avenue were impassable this morning, as residents blocked the roadway and picketed the Irvine Hall entrance to the Mona campus of the UWI, to protest Stewart’s killing.

The fatal incident happened about 3-yesterday afternoon, on Tavern Drive in Cheshire Village, a community that is home to several disabled people.

Stewart himself is not disabled, but was inside the home of Marlon King, the wheelchair user who died tragically in January after being hit by a bus.

Witnesses gave their account of the incident to the Independent Commission of Investigations, INDECOM.

INDECOM’s Director of Complaints for Kingston and St. Andrew is Nigel Morgan.


But the police are reporting that they recovered a 9-millimeter Smith and Wesson pistol, along with two rounds of ammunition.

They say they were confronted by Stewart.

Mr. Morgan says to the best of his knowledge, Stewart was not wanted by the police for any crime.

Councilor for the Papine Division in the KSAC, Venesha Phillips, says residents are concerned that the crime scene may have been tampered with.

Residents are also concerned about what seems to be an upsurge in fatal shootings by the police in recent weeks.

Just last week, 14-year-old Joel Lovelace was killed by police in the nearby community of Bedward Gardens in August Town.

According to Mr. Morgan, since the start of year, the number of fatal shootings by the police per month, has exceeded the number recorded for the last quarter of 2014.

Meanwhile, some disabled residents of Cheshire Village are complaining that the police are intimidating them to get information about yesterday’s fatal shooting incident.

The Councillor for the Papine Division in the KSAC, Venesha Phillips says she intends to pursue the issue with the Police High Command.

Councilor Phillips says the police should exercise care when operating in a community like Cheshire Village.

Councillor for the Papine Division in the KSAC, Venesha Phillips.