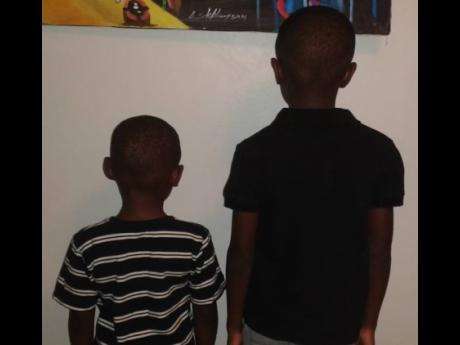 There are more conflicting claims surrounding an incident involving two Rastafarian children, in which their hair was cut and they were reportedly fed meat.

The Police have dismissed the claims from the children’s stepfather, entertainer JahDore, that police were responsible for the haircuts and food.

The boys’ aunt, Melesha Welsh, says she’s the one who took them for a trim and gave them meat, however, the children’s mother, Samela Welsh has hit back, saying the Police are trying to pass the blame on her sister.

Reggae singer JahDore, whose real name is Sean McDonald, says his stepsons were forcibly taken from his home on April 30.

He says the boys, aged four and eight years old, were taken to the Gordon Town Police Station.

The children’s aunt, Melesha Welsh, told Nationwide News that she’s the one who reported to the Police that the children were being kept from school for months.

She says the Police took the children to the station.

Ms Welsh says she, JahDore, the children’s mother, and two other relatives, all went to the station.

She says while the entertainer and his spouse were being questioned by the Police, she took the children to get something to eat.

She says she wasn’t aware they were Rastafarian.

In a statement, the Constabulary’s Corporate Communications Unit, says Police did not trim or feed the children, nor cause that to happen.

It says investigations have revealed that the boys were taken to the barber and lunch by their Aunt, whom the Police said had accompanied the mother to the station.

Police Commissioner Major General Antony Anderson has ordered the Inspectorate of Constabulary to probe the incident.

The children’s mother, Samela Welsh, says she gave no one permission to feed or trim her children.

She says her sister and the other relatives were at the house when the Police arrived to remove the boys. She says they left and went to the Police station, arriving ahead of the police team.

She says while at the station, she was not corresponding with those relatives. She also insists that the Police had no right to leave her children in anyone’s custody without her consent. She says her sons are traumatized.

According to a statement from the entertainer’s publicist, JahDore, who’s an orthodox Rastafarian, is still outraged.

He alleges that his family’s religious beliefs and practices were breached. He says that’s a violation of their human rights.

The artiste also claims he was assaulted by Police during the incident.

He says he was charged with assaulting the Police.

The statement from the JCF does not address those claims.

It says investigations are ongoing and further updates will follow.