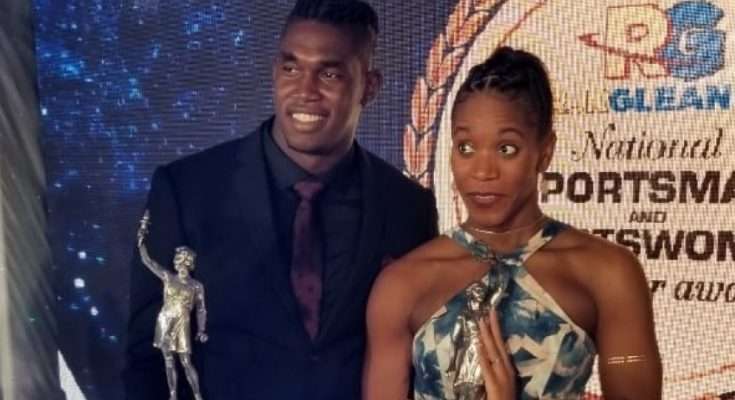 By Alrick SwabyJan 21, 2019, 16:26 pmComments Off on Dacres & Atkinson Cop Sportsman & Sportswoman of the Year Awards

As was expected, Fedrick Dacres and Alia Atkinson were named the 2018 National Sportsman and Sportswoman of the year.

They received the awards at a gala ceremony, at the Jamaica Pegasus hotel, on Friday. Dacres and Atkinson were among 15 nominees for the awards. They both credit their recent conversion to Christianity as having a stabilizing factor in their career. Dacres became a Christian last year, while Atkinson has been walking in the faith for the past two and a half years.

Dacres had one of his best years in 2018 where he secured a trio of major wins. He won the discus gold medal at the Commonwealth Games. He followed up that victory by claiming the Diamond League discus title and then beat the world at the IAAF Continental Cup in the Czech Republic on September 8.

Dacres also won gold at the NACAC Senior Championships in Toronto on August 12. He credits his good showing last year to the support of his coaching team.

Dacres also won the Male Athletes of the Year for athletics.

Meanwhile, Atkinson was winning the national award for the second straight year and three times overall.

The four-time Olympian first won the award in 2014. She said she was surprised by her award-winning performance of 2018.

Atkinson also won three other awards including the People’s Choice “Performance of the Year,” for her new 50-metres breaststroke world short course record of 28-point-56-seconds. She also walked away with the Gleaner Iconic Award and the Female Athlete of the Year for aquatic.

Atkinson says she didn’t expect to win the Iconic Award.