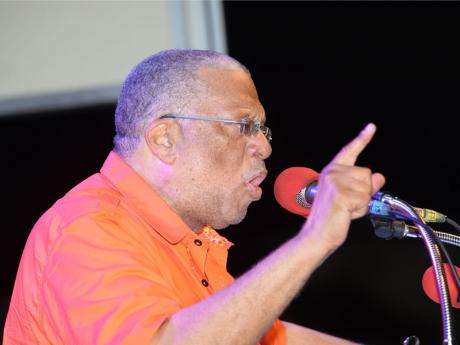 ‘Every Dollar Accounted For!’ – Phillips on PNP Campaign Finance Scandal

By Nationwide NewsnetAug 24, 2016, 19:13 pmComments Off on ‘Every Dollar Accounted For!’ – Phillips on PNP Campaign Finance Scandal

“I accounted for and turned over every dollar to the party!”

On Monday morning, Nationwide News broke the story that PNP Treasurer, Norman Horne, is accusing several senior PNP members of not turning over to the party millions of dollars they solicited in campaign financing for it.

In his 164-page report, Mr. Horne demanded that the senior PNP members who misappropriated what he describes as significant sums return the money by July 29.

Among those accused by the PNP Treasurer of keeping the millions are some former Cabinet Ministers.

Sources in the hierarchy of the PNP say at least two former senior Cabinet Ministers collected millions of US dollars on behalf of the PNP but did not turn the money to the party treasury.

One of the two former Ministers, who’s a Simpson Miller ally, is being accused by some comrades of collecting wads of cash in Venezuela on behalf of the party and not accounting in full to its treasury for the funds.

The other Minister is being accused by comrades of collecting money from a source in China.

He too is being accused of denying the PNP treasury access to the donation he collected. It’s understood that the sums collected by the two former Cabinet Ministers run into hundreds of millions of Jamaican dollars.

Calls placed to those two former senior Ministers today were not answered.

But Dr. Peter Phillips who was PNP election Campaign Director spoke to our news center.

He made it clear that he’s not among those implicated.

Dr. Phillips says he collected significant sums on behalf of the PNP but he accounted for them in full.

Sources say there was acrimony in the PNP prior to the election because millions of dollars which the party Treasury had no access to was being handed out to several PNP operatives from an Upper St. Andrew government property.

In his report, Mr. Horne noted that there were former Ministers who had more money stored in bank accounts which they had personal access to than the treasury.

Phillips, who’s also Member of Parliament for East Central St. Andrew, says the matter is under investigation by the party and he has no basis to support Mr. Horne’s allegation.

Our sources say Mr. Horne has been under pressure to amend his report and remove the damaging allegations which have plunged the Portia Simpson-Miller-led party into a bitter internal strife.