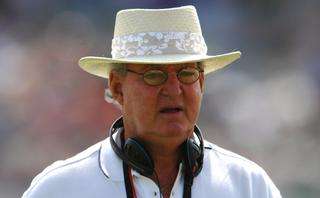 Cozier died this morning at the age of 75.

Leading BBC Cricket commentator Jonathan Agnew this morning described cozier as easily the best cricket radio and TV commentator in the past 25 years .

While West Indies T-20 captain Darren Sammy tweeted:
“Condolences go out to the families and friends of tony cozier that voice will forever be in my head”

South African fast bowler Dale Steyn posted on twitter – his voice will echo in my mind forever! Condolences to the cozier family.

Tony cozier began writing on cricket as a teenager in 1958 and, despite never having played the game, he became one of its most distinguished voices.

His last column was published on May 1. Cozier was admitted to hospital on May 3 for tests related to infections in the neck and legs.

Cozier began his commentary career during Australia’s tour of West Indies in 1965.

Over five decades, cozier grew into an accomplished media professional across mediums all over the world.

Here is a bit of vintage tony cozier commentary.