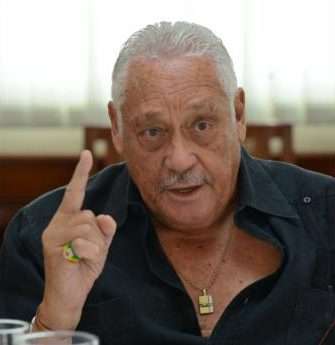 Mining Minster, Mike Henry, is accusing Opposition Spokesman on Energy, Phillip Paulwell of being reckless, rude and impulsive for announcing details of the Government’s signing of an agreement in China for the sale of the bauxite alumina company, Alpart.

Alpart, which is owned by the Russian company, UC Rusal, is to transfer its ownership to the Chinese-based Jiuquan Iron and Steel Group Corporation Limited, JISCO.

The deal is subject to approvals by the Jamaica Government and a number of state bodies in China. But in a statement yesterday, Paulwell said the Government, JISCO and UC Rusal had completed the agreement.

Minister Henry and Energy and Technology Minister, Dr. Andrew Wheatley, are in China to finalize a multi-million-US-dollar deal with Chinese investors.

The deal is aimed at reviving the local bauxite/alumina industry.

Minister Henry and Dr. Wheatley are leading a government delegation.

Mr. Paulwell was invited to the event by JISCO as a guest given his role as former Mining and Energy Minister in negotiating the deal.

After the deal was was signed to formalize JISCO’s move to take over ownership of Alpart from UC Rusal, a statement was issued yesterday from the Opposition PNP over Paulwell’s signature.

In the statement, Mr. Paulwell is quoted as saying that he’s happy that the Holness-administration decided to embrace commitments and work that he had started.

Paulwell says as Energy Minister, he avoided making the announcement when the Chinese Firm exchanged letters with the then Administration to take over Alpart.

He said he was guided by the fact that an election was on the horizon.

Mike Henry is not amused.

In a scathing statement today, he says Paulwell was reckless, rude and impulsive when he disclosed that the Government had signed agreements in China for the sale of ALPART.

He says Paulwell’s impulsive move is typical of his career which – “lacks substance, is froth with failure, and wanting to score political points.”

The Mining Minister says the premature announcement by Paulwell could also be “prejudicial to delicate, ongoing negotiations with the Chinese.”

He says the move by Paulwell shows that he needs ” to learn protocol” when projects are being implemented in the best interest of the country.

Mr. Henry notes that the Government is yet to fully examine the structure of the Chinese firm.

The Mining Minister says the Government will now be visiting JISCO’s plant to assess environmental issues.

4 thoughts on “Henry Blasts Paulwell as ‘Reckless, Rude and Impulsive’”