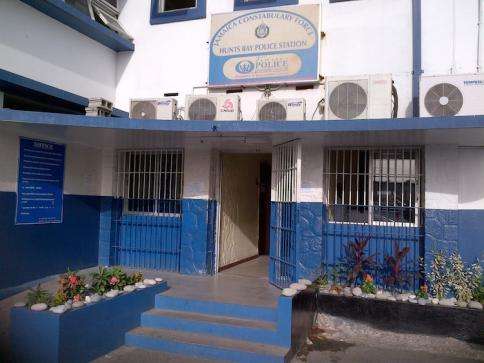 Accused persons being housed at the Hunt’s Bay lockup are reportedly restive this week, protesting the treatment they claim they’ve been receiving while in lock up.

In videos and voice notes that are being circulated on social media, detainees at the lockup are claiming they’re being abused by the officers on duty.

Our news centre has obtained a number of these recordings alleging the abuse.

Sources have also indicated investigations are ongoing into the incidents. The detainees say, among other things, the officers are throwing urine into their cells.

Here’s one detainee pleading for help from the media.

In more than one of the video recordings, the camera shows a liquid substance on what appears to be the floor of one of the cells. Multiple items in the cell also appear to be soaked.

Here’s another accused person alleging they were pepper sprayed.

Nationwide sources indicate that there’s a standoff between accused persons and the police personnel at the lockup.

It’s alleged the detainees became restive after a spot check this week where contraband was found and removed from a number of cells.

Multiple cell phones are among the items reportedly removed from the detainees.

Our sources indicate that since the spot check the accused persons in the lockup have been rebelling. They are also allegedly refusing to eat the meals provided to them.

Our sources also indicate that the men have been throwing urine at the police personnel guarding the cells. Our sources say at least two members of the police force were doused with urine today.

Nationwide News understands that internal controls have been increased at the lockup as tensions rise between the detainees and the police.

Our news centre also understands that internal and external investigations are ongoing and reports will be sent to the Inspectorate of the Constabulary and the Independent Commission of Investigation, INDECOM.