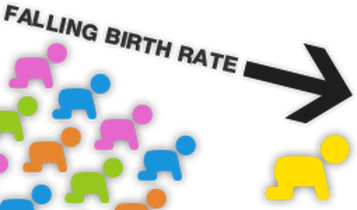 The Health Ministry says the number of babies being born has decreased by 22 percent between January and March 2017.

Speaking at a press conference today Health Minister Dr. Christopher Tufton says this may be linked to concerns over the Zika epidemic of 2016.

Health Minister Christopher Tufton says the declining birth rate could be due to advisories issued by his ministry due to concerns over babies being born with birth defects.

At the height of the Zika Epidemic a link was made between mothers infected with the virus and babies being born with a Microcephaly.

This syndrome caused babies to be born with abnormally small heads and possible brain damage.

But Dr. Tufton says the rate generally may be moving in a troubling direction.

The quarterly report also shows an additional 32,000 Jamaicans visiting health centres for a total of just over 420,000 people.

That’s an increase of 8-percent.

This is twinned with a decrease in usage of Public Hospitals by 44,000 people or just over 7 percent.

Dr. Tufton says this could be linked to the main thrust by the Ministry of Health to increase the opening hours of health centres and reduce wait times.

This is being done to reduce the burden placed on Public Hospitals.

The Minister was speaking this afternoon as part of the launch of the Ministry’s second quarterly report on the health sector.

The report titled “Vitals” covers the period January to March.

Among other things, it notes an 8-percent increase in major surgeries over the period comparative to last year.

A staggering 40-percent of these cases stem from trauma-related incidents such as traffic accidents or violence.

Dr. Tufton says this is of particular concern.