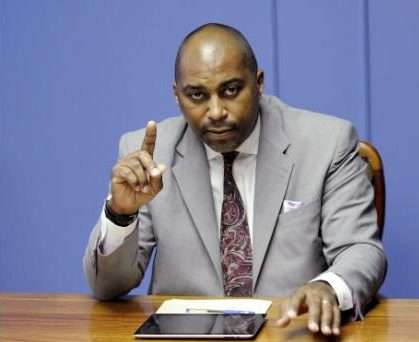 By Kalilah ReynoldsSep 26, 2016, 12:11 pmComments Off on Julian Robinson to Take Helm of PNP Secretariat

Our sources say prior to Mr. Robinson’s nomination, PNP veteran Dr. DK Duncan, had attempted to move a resolution to have Mr. Burke remain as General Secretary.

However that attempt was reportedly shot down by the NEC.

Mr. Burke told a media briefing shortly after the NEC that he intends to spend his final few weeks in the job to prepare the PNP for the upcoming Local Government election.

The outgoing PNP General Secretary says he expects the Local Government election to be held within the next two months.

Meantime ..Long serving PNP Chairman, Robert Pickersgill, was returned to the post during the NEC meeting which took place at the Hotel Versalles in Clarendon.

Mr. Pickersgill has been PNP Chairman for over 24 years.

Anthony Hylton was reappointed as his deputy.

Pickersgill also addressed the media shortly after the meeting of the NEC.