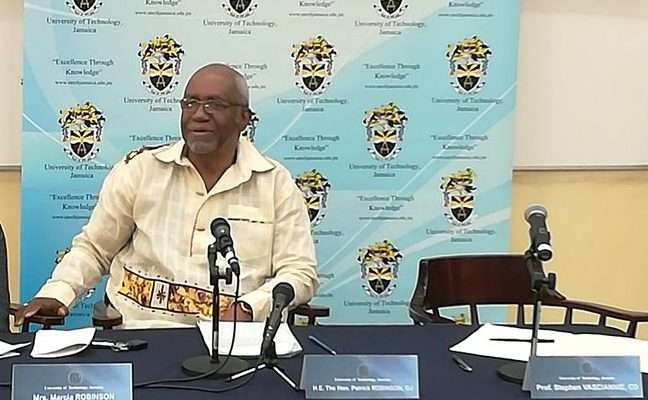 By William MitchellFeb 10, 2018, 18:14 pmComments Off on Justice Patrick Robinson Bats for Prosecutorial Appeal

International Court of Justice Judge, Justice Patrick Robinson, says there should be a Constitutional amendment that’ll give the prosecution the right to appeal a matter where an accused was acquitted of his charges.

Justice Robinson made the call this morning at the University of Technology, UTECH, during a lecture entitled, ‘Qualification of the Rule Against Double Jeopardy’.

In Jamaica, the right of an accused person not to be tried twice is entrenched in Section 16 (9) of Jamaica’s Charter of Fundamental Rights and Freedoms. To do so would violate the Principle of Double Jeopardy. But Justice Robinson’s proposing the prosecution should be given the right to appeal a matter.

Justice Robinson says there’s precedent in law around the world for Jamaica to adopt such a stance. He cites the Criminal Justice Act of 2003 in the United Kingdom that gives the prosecution the right to appeal in that jurisdiction. He also cited the United Kingdom case involving Stephen Lawrence, who was killed in 1993.

Eighteen years after the initial decision to acquit Gary Dobson and David Norris new evidence led to a retrial.

In January 2011 both men where sentenced to life in prison. He says an adoption of legislation in line with the UK’s Criminal Justice Act won’t erode the principle of double jeopardy in the Jamaican constitution. He says it could strengthen the Jamaican legal system but it’ll be subject to narrow safeguards.

Justice Robinson says it also has to be in the interest of justice to have a retrial. There’s been debate regarding the prosecution’s right to appeal in Jamaica in recent years.