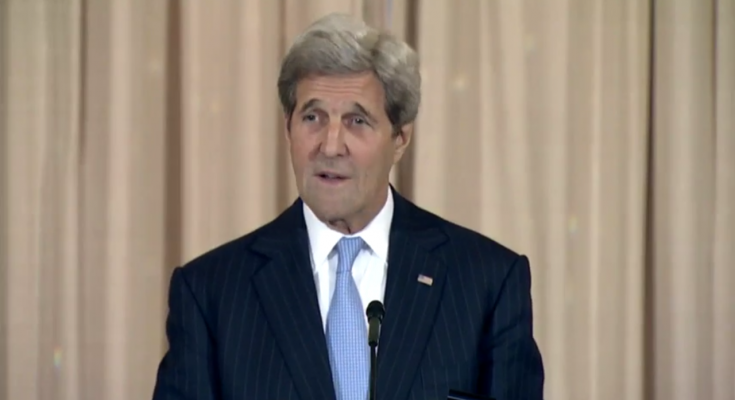 By Abka Fitz-HenleyMay 04, 2016, 10:32 amComments Off on Kerry Cautions Regional Leaders about Energy choices

That was the caution issued last evening by US Secretary of State John Kerry to a high level meeting of Presidents, Prime Ministers and Energy Ministers from Latin America and the Caribbean

The Secretary of State was addressing an audience which included Jamaica’s Prime Minister Andrew Holness and Energy Minister Dr. Andrew Wheatley at a reception held ahead of Thursday’s U.S.-Caribbean-Central American Energy Summit.

Mr. Kerry also praised a historic Paris Climate Agreement aimed at curbing the pace of global warming hailing it an “enormous signal” about the future.

The Secretary of State told the Caribbean and Latin American Leaders that the choices made with respect to energy will define whether their country is up and down.

Secretary of State Kerry drew laughter from the attendees at the reception when he made the light-hearted quip – that Energy choices will not only determine whether countries are moving in the right direction but it may also decide whether politicians in attendance are re elected.

Kerry noted that that dropping commodity prices poses an economic challenge for Latin American countries, many of whose economies are dependent on the sale of raw materials to China and the industrialized world.

According to the Secretary of State breaking that dependency means Latin American nations must embrace trade, encourage entrepreneurship and combat corruption.

The Secretary of State told the assembly of Regional leaders at the state department – “now, more than ever, citizens are making clear that corruption is not going to be tolerated,”

The address by the Secretary of State also signaled the closing of the 46th annual Washington Conference on the Americas.

The Washington Conference of the Americas was coordinated by the Council for the Americas. Dozens of foreign dignitaries and U.S. policymakers and business leaders were in attendance.