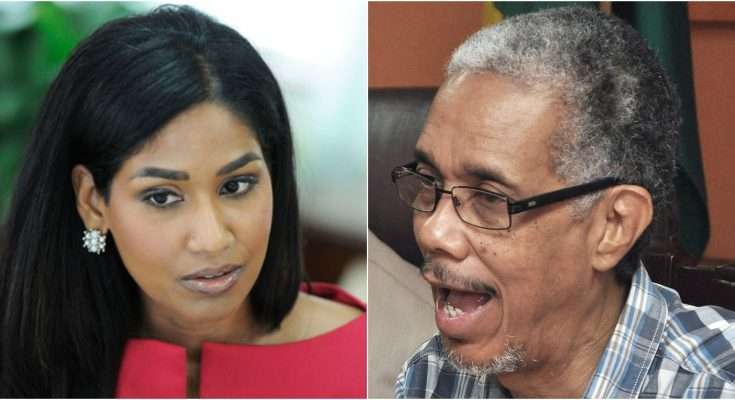 A legal battle could be looming between the Member of Parliament for South East St. Ann, the PNP’s Lisa Hanna, the party’s General Secretary Paul Burke and the Gleaner company.

The latest dispute between the two comrades has been triggered by a publication yesterday in which Mr. Burke responded to assertions made by Miss Hanna on Cliff Hughes On Line on Wednesday.

Ms. Hanna is demanding an apology and retraction of the article.

However, Mr. Burke is standing by his comments as reported in the Gleaner.

Ms. Hanna’s interview on Nationwide 90FM on Wednesday is still creating waves in and outside political circles.

PNP General Secretary Paul Burke responded to assertions made by the MP on Cliff Hughes On Line in a report published by the Gleaner the following day.

That article could now be the basis of a legal battle.

Attorney at Law, Delrose Campbell, has written Mr. Burke and The Gleaner alleging that her client, the MP for South East St. Ann, Lisa Hanna has been savagely libeled in a report published on December one.

The comments of Mr. Burke suggested that Ms Hanna was not truthful in some of her claims made in the Nationwide Radio interview.

Ms. Campbell says such a claim is false and malicious.

She says the comments, taken together with the headline, which we will not repeat, meant the words in their natural and ordinary meaning suggested her client deliberately misrepresented the truth; intentionally misled the public; falsely and maliciously publicized facts she knows to be untrue; is a dishonest person; tells lies on public radio and is unfit to be a Member of Parliament.

Ms. Campbell says Ms. Hanna stands by every word she uttered to Cliff Hughes during the interview.

She added that documentation that exists will establish that the MP told no lies.

The Attorney is demanding that both the Gleaner and Mr Burke publish within 72 hours a full apology and retraction of the words published in a form approved by her client.

She’s also seeking compensation for the damage to Ms. Hanna’s character and reputation.

She says if this is not done within the period specified legal action will be taken.

Mr. Burke, who released a copy of Ms. Campbell’s letter to the media, also provided what he said was an interim response to the MP’s Attorney.

The outgoing General Secretary said he can verify, as an indisputable fact, that the PNP acted responsibly in South East St. Ann in addressing all the situations raised by Ms. Hanna.

According to Burke, there were more leadership interventions and mediation meetings than all other constituencies combined.

He added that both leadership and secretariat teams were sent to South East St. Ann.

Mr. Burke says the fact that the party did not always or mainly agree with Ms. Hanna’s recommendation does not mean that the matter was ignored.

He notes that at least three attempts were made by the Deputy Chairman Anthony Hylton at mediation before the process was frustrated.

Burke says with Ms. Hanna’s permission he will release all correspondence between them and will have an IT expert verify their authenticity.

No mention was made about an apology in what he said was a quick response as he was busy preparing his final report to the National Executive Council.