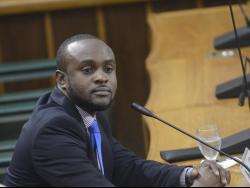 Director at the Petroleum Corporation of Jamaica, Lionel Myrie, insists he has nothing to hide regarding his role in the still unfolding Petrojam saga.

The PCJ director then proceeded to deflect several questions posed to him at today’s sitting of Parliament’s Public Accounts Committee, PAC, on the issue.

However, he insists that he acted solely as a courier in a matter currently under investigation by the Major Organized Crime and Anti Corruption Agency, MOCA.

I was just a courier!

That’s Lionel Myrie’s defense of his role in the Petrojam Scandal.

According to an Auditor General’s report, Mr. Myrie forwarded a letter from the McCooks Pen Citizen’s Association to then Petrojam General Manager, Floyd Grindley, turning down a donation of 9 million dollars.

The association has since denied sending such a letter.

Mr. Myrie then forwarded another letter from the unregistered Sydenham Citizen’s Association requesting a 9 million dollar sponsorship from Petrojam.

Both matters are under investigation by MOCA.

Permanent Secretary in the Ministry of Energy, Carol Palmer, previously told the PAC that Mr. Myrie informed her that at the time the letters were forwarded he did so in his capacity as Personal Assistant to then Energy Minister, Dr. Andrew Wheatley.

After several back and forth questions with no forthcoming answers, Mr. Myrie’s attempt at stonewalling the committee did not sit well with Central Manchester MP, Peter Bunting.

Neither did this go unnoticed by Permanent Secretary Palmer.

Mr. Myrie finally cooperated with the committee after PAC Chairman. Mark Golding, informed him of the criminal consequences of failing to answer questions.

This resulted in Mr. Myrie stating that he received the McCooks Pen letter from now deceased Councilor for the Homestead Division for the St. Catherine Municipal Corporation, Owen Palmer.

He says Mr. Palmer was acting in his capacity as Constituency Development Manager.

He also continued his insistence that his only role in the matter was scanning and emailing the letters to Petrojam.