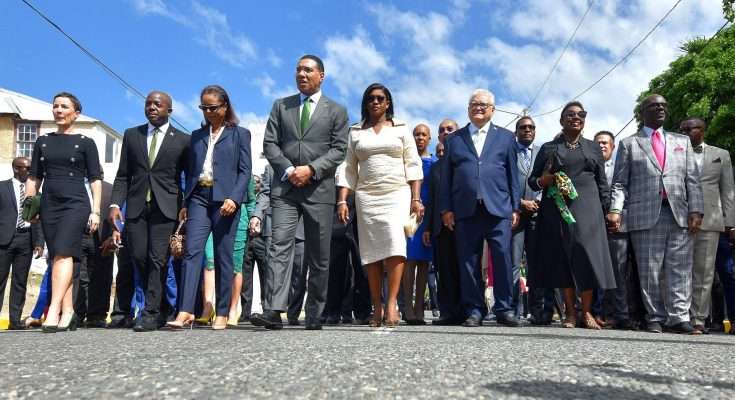 The pomp and pageantry that accompanies the ceremonial opening of Parliament was on display this morning on Duke Street in downtown, Kingston.

Members of both political parties walked the heavily guarded Duke Street to cheers from the party faithful and children.

On the north side of Duke Street were JLP supporters dressed in green while on the south stood, PNP supporters decked out in orange clothing.

Tauna Thomas was there.

It was a hot and windy day in downtown, Kingston.

Members of the Jamaica Constabulary Force offered bottles of water to persons as they waited to see their representatives take the very familiar walk on Duke Street into the nation’s parliament.

Just after 10’o clock, the morning’s events got underway with the sounds of the Jamaica Defence Force’s marching band.

Not long after those sounds, Prime Minister Andrew Holness and the JLP Members of Parliament and Senators arrived.

The Opposition members then made their way from the south entrance of Duke Street.

Both the Government and Opposition parliamentarians were met by loud cheers from their party supporters and children from the nearby schools who had gathered a stone’s throw away from Gordon House, just outside the barricades.

The Governor General, who was last to arrive, keenly inspected members of the security forces.

The serving men and women withstood the pressure of gusty winds and dust nuisance by remaining at attention through the inspection.

Their shine black combat boots caught the attention of many onlookers.

Meanwhile, as the parade ended the area quieted down.

By this time, word now reached both sides of the political divide that Councillor Kari Douglas had joined the JLP.

Nationwide sought the views of both JLP and PNP supporters.

One PNP member ,Sonia Montague, says Councillor Douglas will have to live with the consequences of crossing the aisle.