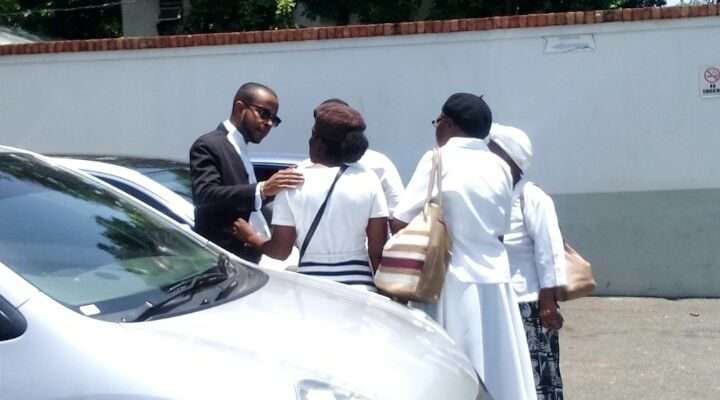 By Tauna ThomasAug 24, 2017, 11:11 amComments Off on Pastor Accused of Raping Child Protests his Innocence

‘Malice, ill-will, spite and attempt to extort him!’

The corporate area pastor is accused of raping and impregnating the girl when she was 12-years-old. But he’s denying the charges and has offered to take a DNA test to prove his innocence.

Blake made his first appearance in the Kingston and St. Andrew Parish Court today where he was granted bail in the sum of $1.5-million, with one or two sureties. He’s charged with rape, forcible abduction, grievous sexual assault and sexual touching of a child. But he says the case was brought against him by the girl’s mother, out of malice.

Blake is the head clergyman at the Harvest Temple Apostolic Church on Slipe Pen Road is Kingston.

In court this morning, he said he’d voluntarily offer his DNA to prove he did not impregnate the girl.

Presiding Judge, Simone Wolfe-Reece, has ordered that the DNA test be done before the pastor is released.

Blake signed an order to have the test done. He’s a father of six.

In his defence, he says he’s never touched or raped the girl. His Attorney, Able Don Foote says Blake has been a pastor for more than 30-years. He says he’s a man of exceptional repute with an unblemished record.

Mr. Foote says he’s confident the matter will not pass a no-case submission.

Allegations are that over the past two years, Blake raped the girl who’s now 14 years old.

It’s further alleged that the Pastor gave money to her to induce her to remain silent. It was also reported that Blake was engaged to the child’s mother.

However, in court today, Mr. Foote said that isn’t true. But he said they had ‘some relationship’ but didn’t disclose the nature of the relationship. He says they ended their relationship in 2015.

Mr. Foote says the case brought against his client is ‘motivated by money’.

In court, he revealed that the mother of the minor was the Treasurer at the church. He says the mother was Treasurer up to July 1 this year. He says between 2015 and July this year, the girl’s mother stole over $300,000 from the church.

According to him, the mother also abandoned her obligations to pay back the church. He says this led to the complaint being filed by the mother in an attempt to extort his client.

Meanwhile, Blake is to return to court on October 5. He’s been granted bail with several conditions. He’s been ordered not to make contact with the complainant, her mother or any of her siblings. He’s also not to be alone with any person under the age of 18 unless they’re his children.

A stop order has been placed on him at all ports of exit.

Blake is to hand over his travel documents and report to the Harbour View Police station, in St. Andrew, every Wednesday and Saturday between 6 a.m. and 6 p.m.