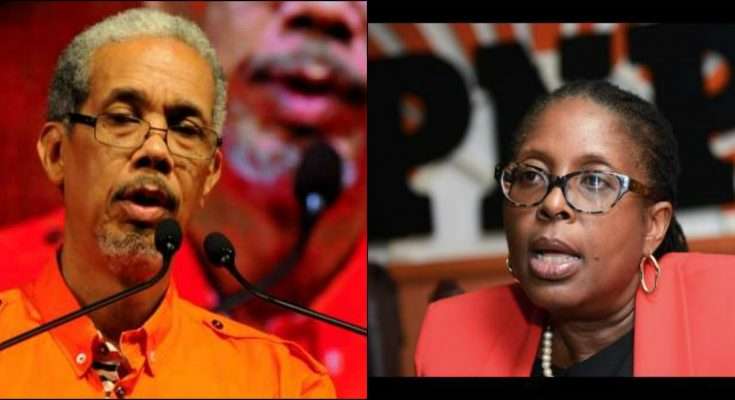 Mr. Burke says he was deceived into believing that Dr. Brown Burke would not declare support for either Peter Phillips or Peter Bunting in the leadership race.

He made the allegation in a stunning 14-page letter which he sent yesterday to the party’s officer corp.

The letter has been obtained by Nationwide News.

On Friday, confirmation came that Dr. Brown Burke is endorsing Mr. Bunting when she signed his nomination papers.

In his letter, Mr. Burke says Dr. Brown Burke told him repeatedly that she’d not declare for either candidate.

The former PNP General Secretary says his wife told him that while she’s not comfortable with some people who are supporting Dr. Phillips, she could never support Peter Bunting.

But, Mr. Burke says up until the eleventh hour, his wife deceived him into believing that she’d not support a candidate.

Burke says based on conversations he had with her, he’d given certain assurances which unintentionally deceived some of his and Dr. Brown Burke’s allies.

According to the former PNP General Secretary, his wife’s approach to declaring her hand was disingenuous, however, he says she remains the love of his life and his best friend.

Mr. Burke says Dr. Brown Burke’s move to deceive him and her decision to support Peter Bunting is one of the worst political blows he’s received since being involved in the PNP.

Dr. Brown Burke’s endorsement of Mr. Bunting is seen as a big boost to the Central Manchester MP in his bid to remove Dr. Phillips as party president.

Mr. Burke told our news center last night, it’d not be appropriate for him to comment on his letter.

Sources close to the South West St. Andrew MP told our news center that she acted honorably and Mr. Burke was not authorized to give any assurance on her behalf.

The sources say it should be noted that Dr. Brown Burke has stated publicly several weeks ago that she’d consult her delegates then declare who she’ll support in the leadership race.