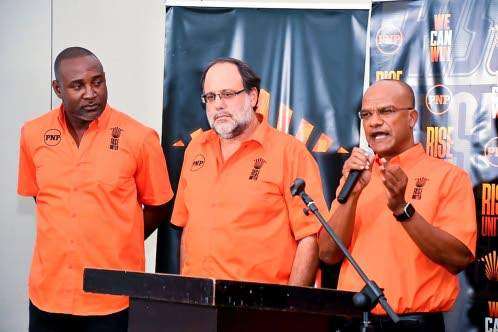 It’s been reported that the members were excluded due to complaints of bias from the One PNP Campaign of incumbent PNP President, Dr. Peter Phillips.

Rise United is demanding that they be accorded the same privilege and is requesting that a number of persons be sidelined as well due to their perceived bias against Peter Bunting.

On the eve of the PNP’s Presidential Election, both the Phillips and Bunting camps are again at daggers drawn.

Rise United Campaign Director, Dr. Angela Brown Burke, says information coming to her is that secretariat members are being relieved of their election day duties on the basis of alleged bias.

Dr. Brown Burke says if the secretariat does believe such persons are compromised as a result of their association with the Rise United Campaign then she has no issue with the decision.

However, Dr. Brown Burke says in the interest of balance, the same courtesy must be extended to the Rise United Camp.

A letter purporting to be the complaint obtained by Nationwide News, lists more than 30 names the Bunting camp is uncomfortable with performing election day roles.

However, the Rise United Campaign Director says nothing will deter their team from seeking victory tomorrow.