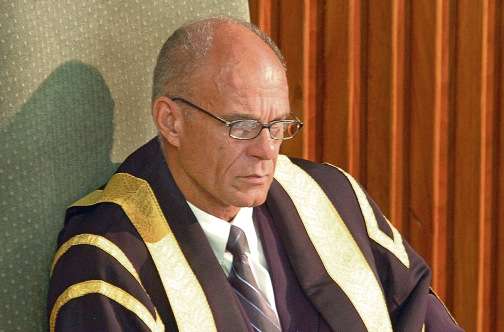 The demands for a change in the leadership of the PNP are intensifying!

The former MP for South Manchester and retired Speaker of the House, a PNP veteran, Michael Peart, has gone public with his demand that party President Portia Simpson-Miller and the party’s entire officer corps must offer their resignations.

Mr. Peart’s call comes as pressure builds for a change of leadership of the PNP, following its election defeat on February 25.

Nationwide News understands that last weekend, at least two of the party’s six regions moved motions, calling for senior members of the party, including embattled General Secretary, Paul Burke, to face consequences for their role in the PNP’s election defeat.

The disquiet and grumbling about who is to be held accountable for the PNP shock election loss have been growing.

Today it’s out in the public.

Our sources say during a meeting of the PNP’s Region Five Management Committee on the weekend, Michael Peart and some comrades moved a motion calling for the resignation of Mrs. Simpson Miller and the entire PNP officer corps.

That motion was not passed after Region Five Chairman, Mikhail Phillips, expressed his discomfort.

But Mr. Peart is sticking to his demands for change. Peart is a PNP big wig and veteran.

In an interview with Nationwide News today, the former House Speaker is adamant that those who led the party’s unsuccessful bid for re-election must pay the consequences.

Meanwhile our news center understands that on the weekend a motion was passed in the PNP’s Region One calling for the removal of Paul Burke from the post of General Secretary.

The motion was passed at a management committee meeting and is expected to be discussed at this month end’s meeting of the PNP’s powerful National Executive Council, NEC.

Burke is likely to face a no confidence motion at that NEC meeting.

And Mr. Burke told our news center today that he’ll not comment publicly on calls for his resignation.