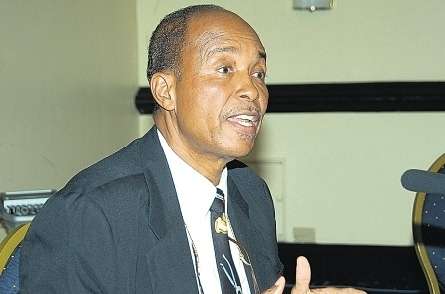 There’s discord among prominent figures in the governing People’s National Party, PNP on the eve of the party’s announcement of its candidate to replace Roger Clarke as Member of Parliament for Central Westmoreland.

Former PNP vice president, Dr. Karl Blythe, is accusing two senior members of the organization’s executive of being party to an effort to derail his ambition to succeed Mr. Clarke.

Dr. Blythe is also warning that he’s prepared to go to Court to ensure due process is observed in the candidate selection process.

PNP Chairman Robert Pickersgill and the party’s General Secretary, Paul Burke are the men accused by Dr. Blythe of taking part in a meeting where plans intended to impose a candidate on Comrades in Central Westmoreland were discussed.

The former PNP vice president says he was not invited to the meeting which took place on Sunday, despite having already made known his interest in succeeding Mr. Clarke as MP.

Dr. Blythe expressed his concern in a letter to several party officers, including Paul Burke. A copy of the letter has been obtained by Nationwide News.

The former Cabinet Minister stated that Mr. Pickersgill as Chairman, is chief guardian of the party’s constitution yet took part in a meeting where due process was not observed.

In his letter, which was written today, Dr. Blythe said he would not sit idly by and allow the PNP to impose a candidate/caretaker on Central Westmoreland and trample upon the right of comrades to choose.

Dr. Bythe said he will not allow the constitution shaped by the PNP’s founders to be disregarded.

The former PNP vice president said under no circumstances will he accept the selection of a candidate by what he described as a flawed, illegal, undemocratic and unconstitutional process.

Our news center contacted Dr Blythe this afternoon but he declined comment beyond confirming that he had in fact written the PNP.

For his part, Mr. Burke reinforced his discontent that the letter sent to him has been leaked to Nationwide News.

Meanwhile, Mr. Burke declined to confirm or deny reports reaching our news center that attorney-at-law, Michael Erskine, is the man the PNP intends to install as candidate/caretaker in Central Westmoreland.