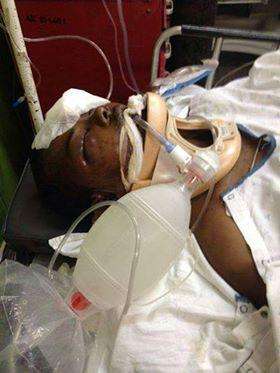 The Police High Command is this afternoon denying that members of the Constabulary are responsible for the death of 31-year-old Mario Dean, while in their custody.

But just who beat Dean is now in question.

It’s also caused a fiery demonstration this morning in his hometown of Rosemount, St. James and other nearby communities.

Dean was picked up by the police about 7:15 Sunday morning, for possessing a ganja spliff.

He was offered bail that same morning, but, according to police, refused to cooperate by not providing the necessary bail requirements.

The Police claim that a surety who turned up on behalf of Mr. Dean, also refused to cooperate.

As a result, they placed him back in custody.

That’s when things took a turn for the worst.

According to the police, a row involving Mr. Dean broke out in the lockup around 11:30 am.

The police claim they found him suffering from multiple injuries to the head and upper body.

They say they took him to hospital, where he died yesterday.

But Dean’s family doesn’t believe the official account of what happened.

His mother, Marcia Frazer, told the Gleaner newspaper that police had initially told doctors that he had fallen off a bed.

She says they later told the family that he had been beaten by his cell mates.

Mr. Dean’s friend and surety, Castel McKenzie, says he does not believe the injuries were the result of punches alone, and says he doesn’t buy the story given by the police.

The High Command insists that based on statements collected so far, the injuries were inflicted by other inmates.

The Independent Commission of Investigations, INDECOM, is now probing the matter.

Minister Bunting says while the matter is being investigated by INDECOM and the police, he’s requested that the Acting Commissioner, Glenmore Hinds, immediately examine the arrangements for supervising detainees.

This, to ensure the safety of those in state custody.

The Minister has also expressed condolences to the family and friends of Mario Deane for this tragic and unnecessary loss.

The Opposition’s deputy spokesman on Justice, Harold Malcolm, has condemned the beating.

Malcolm says he’s concerned about the differing stories surrounding what he describes as Dean’s violent, sad and untimely death.

He says the impunity which often attends these gross violations must come to an end.

Protestors this morning said that they want to know the truth about what happened.

Deane’s family has said they’ll be seeking legal advice as to how to get justice for him.