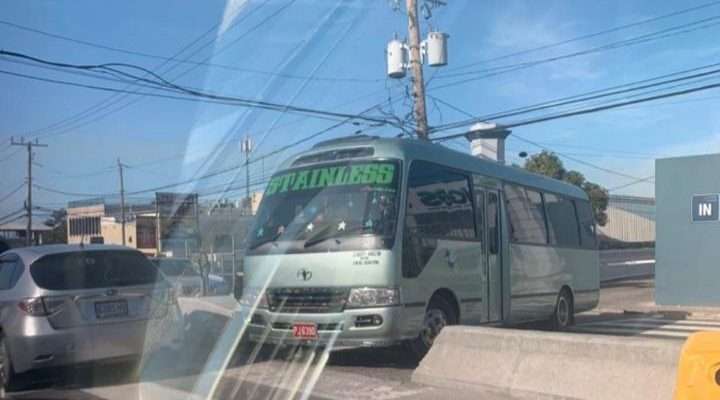 Police Removes Alleged PPV Driver Off The Street, Brought In For Questioning

The alleged driver of a public passenger vehicle caught on camera making an illegal and dangerous turn on Constant Spring Road in St. Andrew this morning is being interviewed by the police.

The pictures of the illegal and dangerous act have gone viral on social media.

They’ve also sparked public outrage over the rampant and dangerous practices of operators of public passenger vehicles across the country.

The driver allegedly made the turn this morning on a pedestrian crossing on the newly expanded and refurbished Constant Spring Road.

The reactions on social media have been furious with Jamaicans demanding that the driver feel the full force of the law.

It’s understood that the bus has been taken off the road by the police and is being kept at the Transport Authority while investigations are carried out.

The National Works Agency recently apologized for a gaffe that saw a pedestrian crossing painted in a section of the road where a concrete barrier was still present.

But no sooner had the Works Agency rectified the error, the lawless operators pounced.

The picture appeared on social media this morning showing a green coaster bus making the illegal and dangerous turn at the newly constructed pedestrian crossing.

The bus, which is branded ‘stainless’ allegedly made the turn on Constant Spring Road just below the Shortwood Road traffic lights.

Deputy Superintendent of Police in charge of the Constabulary’s Corporate Communication’s Unit, Dahlia Garrick, says the police launched an investigation upon seeing the pictures.

She says the alleged driver is now being questioned by the Police.

DSP Garrick is urging road users to continue their cooperation with the police.

Since the incident this morning measures have been taken to prevent a reoccurrence of the reckless driving.

Concrete blocks have been placed at the pedestrian crossing.

They’re designed to prevent drivers from committing a similar offence.

The barriers don’t impede the flow of vehicular or pedestrian traffic.

Meanwhile, the police Police and Transport Authority are also pursuing the driver of a taxi which was photographed committing a similar infringement.

It’s unclear on which road that incident occurred.