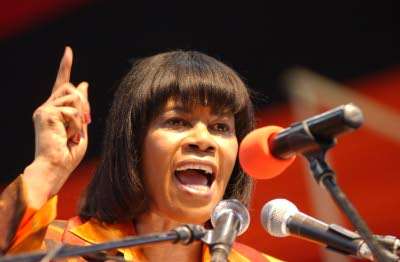 Portia Lashes Out at ‘Ungrateful’ Comrades

By Nationwide NewsnetFeb 07, 2017, 11:02 amComments Off on Portia Lashes Out at ‘Ungrateful’ Comrades

PNP President Portia Simpson Miller yesterday lashed out at some comrades whom she says are pushing her out of the office.

She describes those persons as being ungrateful.

Shortly after Mrs. Simpson Miller’s presentation, members of the officer corp indicated that her resignation will become effective on April 2.

A special delegate’s conference is to be held on March 26 to elect a new leader.

Sources say Mrs. Simpson Miller told the NEC that there are members of the party who’ve wanted to see her gone for a long time.

Mrs. Simpson Miller also reportedly lamented that at the last post NEC media briefing it was announced that she was leaving the post soon.

She says this announcement was made without the matter being first discussed with her.

Mrs. Simpson Miller said it’s for this reason she’s kept the timeline for her departure to herself.

She also reportedly told the NEC that she’d remain as Member of Parliament for South West St. Andrew, until the appropriate time, after she steps down as party President.

Mrs. Simpson Miller also reportedly told the meeting that there are some comrades who’ve tried to suggest that she’s an idiot.

She mused that she didn’t know it was possible for an idiot to obtain a bachelors degree.

The PNP President would lash out at what she described as ungrateful elements in the party.

Several sources in the NEC meeting told us Mrs. Simpson Miller said these ungrateful elements have failed to appreciate that she has quote: “worked like a donkey for this movement.” End quote

She also reportedly said there are some comrades who do not like to see women in leadership positions.

The outgoing PNP President reportedly told the party they should not come to her when they want to use her again to win another election.

She would again blast those whom she says have been leaking internal PNP business to the media.

Meanwhile…the outgoing PNP President ended what’s expected to be her final address to the NEC without announcing a specific date for her departure.

The officers then announced that Mrs. Simpson Miller’s resignation would take effect on April 2.

Nomination for the post of President will be opened from February 6 to 10.

A special delegate’s conference is to be held on March 26.

It’s widely expected that Dr. Peter Phillips will then be elected unopposed as party president.

When our news center called Mrs. Simpson Miller for a comment yesterday we were told she’s not available and should be left alone.