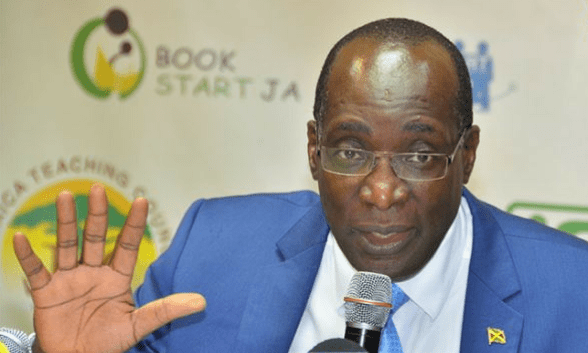 By Nationwide NewsnetMar 20, 2019, 17:24 pmComments Off on Ruel Reid SACKED Amidst News of Corruption Probe

The Office of the Prime Minister, OPM has confirmed that Prime Minister Andrew Holness has requested and received the resignation of Ruel Reid as Education, Youth and Information Minister.

Nationwide News disclosed at 21 minutes after 9:00 this morning, that the Prime Minster has sacked Senator Reid from his Cabinet.

The Minister’s sacking comes as a corruption scandal is engulfing an institution which falls under the Education Ministry.

Nationwide News understands that after ending his contribution to the budget debate last evening, Prime Minister Holness summoned Mr. Reid to a meeting and told him to step aside.

The Education Minister submitted his resignation letter to the Prime Minister this morning. Our sources say Reid had been contemplating his future over the past few days. But it’s understood that he was told by the Prime Minister last night that he should go.

Reid also submitted his resignation as a Senator to Governor General Sir Patrick Allen this morning.

Nationwide News sources say a messy state of affairs at Caribbean Maritime University, CMU, is at the heart of the issue which has seen the fall of the Education Minister.

It’s understood that a female consultant was contracted and paid sums of money by the University. The consultant is said to have directed that the money be paid into the bank account of a woman. The woman whose account the money was paid into, is on record as the helper of Senator Reid.

Nationwide News sources say the consultant is now the subject of a Police investigation. The Police are moving to find out whether the money paid out was for work actually done. But senior people in CMU’s management are insisting that the consultant had actually done work for which money was paid out.

The JCF’s Counter-Terrorism and Organized Crime Agency, C-TOC and the Financial Investigation Division, FID of the Finance Ministry, are leading the investigation.

Additionally, the Auditor General has been carrying out an investigation into the CMU and other agencies in the Ministry.

Yesterday, a defiant Reid told to our news center that he was taken aback by the allegations of corruption at agencies under his watch. He declared that he has nothing to hide.

Mr. Reid was first appointed as a Cabinet Minister in March 2016.