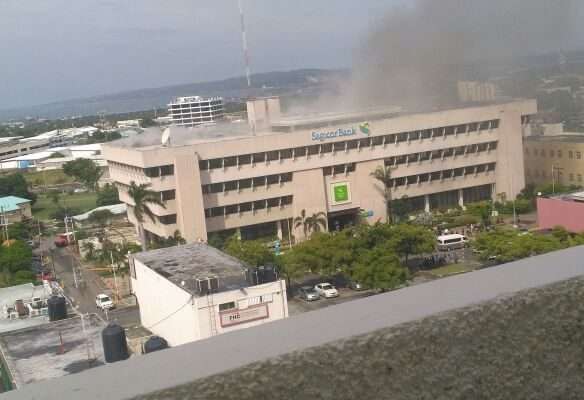 Sagicor Bank, New Kgn Closed to Determine Cause of Fire

By Abka Fitz-HenleyMay 15, 2017, 17:14 pmComments Off on Sagicor Bank, New Kgn Closed to Determine Cause of Fire

A fire on the roof of the Sagicor Bank in New Kingston prompted the evacuation of staff this morning.

It’s understood that a generator which caught fire prompted the pre-cautionary evacuation exercise.

Smoke could be seen coming from the building sometime after 9:00 this morning.

Sources at Sagicor say the small blaze was quickly brought under control.

There are no reports at this hour of anyone being hurt.

Meanwhile…Vice President of Group Marketing, Ingrid Card, says the smoke has since subsided.

She says the building will remain closed until an investigation into the cause of the smoke is complete.

Ms. Card says clients are being redirected to the Half Way Tree and Hope Road branches.