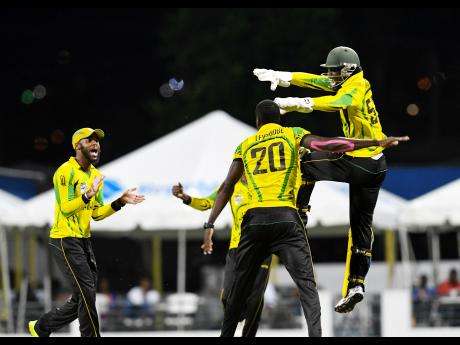 Scorpions Squad Without Senior Talent ahead of Professional Cricket League

By Alrick SwabyOct 04, 2017, 15:35 pmComments Off on Scorpions Squad Without Senior Talent ahead of Professional Cricket League

The Jamaica Scorpions will be without several of their senior players for the upcoming Professional Cricket League.

The tournament is set to start at the end of the month.

At least seven senior players will be out due to commitments with the West Indies ‘A’ team, Windies senior team, and T20 cricket.

Nikita Miller, the team’s captain could be out for the first game of the season against the Guyana Jaguars set to bowl off on October 26 in Guyana.

He recently underwent a medical procedure and may not recover in time for the opening match.

The trio have been called to the West Indies ‘A’ team for duty against Sri Lanka ‘A’ in three unofficial Tests in Jamaica starting October 11.

In addition, the Scorpions will lose the services of opening batsman Chadwick Walton, Rovman Powell and Andre McCarthy to the Bangladesh T20 league that runs from November 3 to December 12.

No Objection Certificates are to be granted to the players clearing the way for participation in the T20 league.

Meanwhile, Jermaine Blackwood will be with the West Indies senior squad in Zimbabwe.