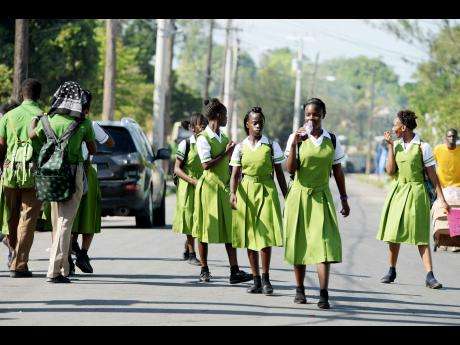 The Ministry of Education is probing an incident in which a female student at the Norman Manley High School in Richmond Park, St. Andrew, was stabbed metres away from the institution.

A three minute video of the incident has been watched thousands of times on various social media sites. The video shows a crowd of female students in their school uniforms shouting and jostling, as two of their schoolmates engaged in a brawl.

The warring students and their cheerleaders spilled into the streets, temporarily blocking traffic. Someone close to the person videotaping the incident then blurted out that a knife was brought into play.

A third female, dressed in a pink shirt and black leggings can be seen grabbing one of the schoolgirls.

She then appears to stab the schoolgirl several times with what appears to be a kitchen knife. The injured teen breaks free before removing her school blouse. Blood is seen on parts of her upper body and head.

Those students who have come to assist her, are urged by others to user her blouse to compress the wound on her head.

The injured girl walks a few meters, before collapsing on the streets. The video ends with her schoolmates attempting to lift her by her arms and legs.

Our new centre contacted a a Vice Principal at the school, Paul Hall who said both the school and the Police were probing the incident. He said the female seen with the knife in the video is not a student at Norman Manley High.