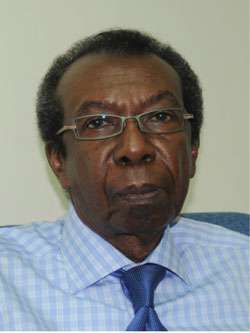 A stalwart of Jamaican medicine, Professor Barrie Hanchard, has died.
He’s reported to have collapsed and died yesterday.

According to the University of the West Indies Mona website, for twenty years, Professor Hanchard was the principal investigator on a team conducting research into the retrovirus HTLV-1.

This virus is responsible for a number of diseases that affect several systems of the body, including a unique leukaemia, a chronic paralysis of the lower limbs and a chronic eczema in children.

The recognition of these three diseases gained international acclaim for UWI’s Faculty of Medical Sciences.

Additionally, the information was considered so vital to the health of the population that the Ministry of Health instituted the testing of blood for HTLV-1 in order to prevent spreading by transfusion.

During his decades-long tenure at UWI Mona, Professor Hanchard trained hundreds of young doctors in pathology.

He’s also written a chapter in one of the most widely used pathology textbooks in the world – The Pathological Basis of Disease.

Editor’s Note: A previous version of this post was accompanied by another image. We do apologize and regret the error.