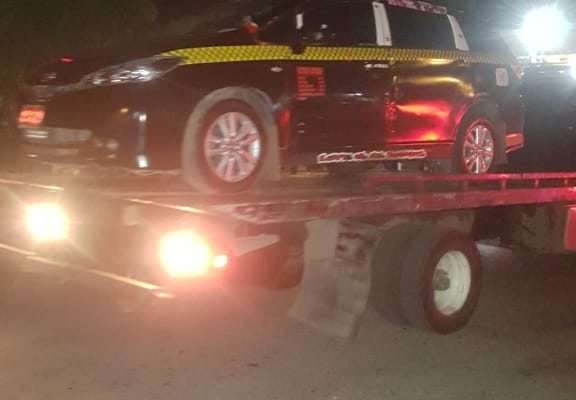 The Police have seized the Black Toyota Wish that was used to mow down a policeman in New Kingston yesterday.

The Constable, who was conducting traffic management duties at the intersection of Trafalgar Road and Worthington Avenue, reportedly signaled the driver of a Toyota motorcar to stop after the driver committed a traffic violation.

The driver reportedly slowed down before accelerating the vehicle into the path of the Constable, running him over and crushing one of his legs.

Last night, the Jamaica Constabulary Force revealed that the taxi was found abandoned in the Mountain View area yesterday.

The Police say the car is now in its custody and crime scene investigators are processing it.

Nationwide News understands that the police have made contact with the owner of the vehicle but the driver is still at large.

Yesterday, the police released a photo of the taxi captured on closed-circuit television via Jamaica Eye.

The injured Police remains in hospital and is to undergo surgery.

In the meantime, the President of the Senate, Tom Tavares Finson, is adding his voice to calls for more discipline on the nation’s streets.

He made the call at the beginning of yesterday’s sitting of the Senate.

He noted the incident in New Kingston yesterday in which a policeman was injured and admitted to hospital.