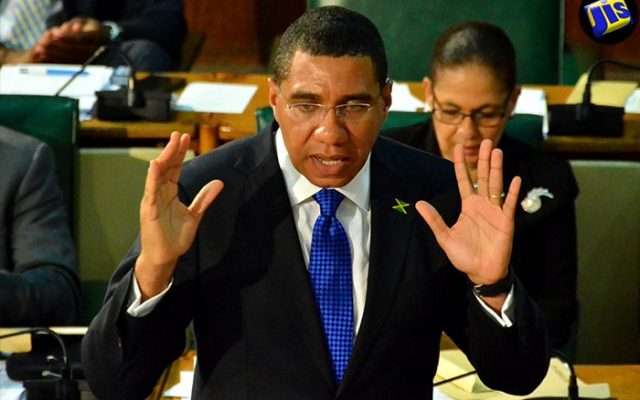 Prime Minister Andrew Holness is dismissing claims by the Opposition that he’s being alarmist for suggesting that “twenty dangerous criminals” will be unleashed in St James at the end of the state of emergency.

The Opposition has also accused the Prime Minister of ‘fear-mongering.’ Mr. Holness dismissed the claim while speaking with Nationwide’s Dennis Brooks over the weekend.

The Prime Minister says he’s been in discussions with the Attorney General regarding arguments that a further extension of the SOEs may be unconstitutional. This is the comment that the Opposition leader is calling alarmist.

Mr. Holness was referring to the persons who remain in lockups in St. James under the State of Emergency.

Mr. Holness is hitting back at those calling his comments “alarmist”.

He says normal policing cannot be the response to the level of criminality that has been carried out by those who are now in hiding.

Opposition Leader, Dr. Peter Phillips, has argued that the States of Emergency aren’t needed for the public to feel safe. He says 99-percent of what’s being done now can be achieved without an SOE.

However, the Prime Minister says the Opposition’s argument shows a lack of understanding or a deliberate intent to deceive. He says the powers now granted to the military will be withdrawn once the SOEs are lifted.

Meanwhile, Opposition MP, Peter Bunting has argued that further extensions of the States of Public Emergency could be challenged in court. He says the Charter of Rights and Fundamental Freedoms does not support additional extensions of the special security measures.