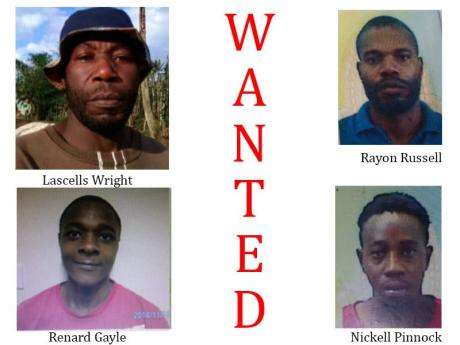 Police in Trelawny have listed four men as wanted and are urging them to turn themselves by today.

They are Lascelles Wright, otherwise called ‘Byah’ or ‘Stella’, of Tyre district, in Trelawny.

Wright’s wanted for the murder of Jason Sinclair on January 22, 2019 in Tyre district.

He’s wanted for the murder of Albert Mowatt who was killed on March 20, 2019 on Market Street in Trelawny.

Gayle is wanted for three counts of wounding with intent committed on April 28, 2019 in Martha Brae, Trelawny.

Pinnock’s wanted for the murder of Owen Green on March 28, 2019 in Kinloss district, Clarks Town in Trelawny.

The police are asking anyone knowing the whereabouts of these men to contact the Falmouth Police at 876-954-3271, Police 119 emergency number or the nearest Police Station.

They’re also reminding members of the public that it’s an offence to harbour criminals elements.

Previous PostFurore Over Trelawny Bridge Closure Next PostHuman Traffickers Are Using Cryptocurrencies, The Dark Web To Hide Their Trail - Police