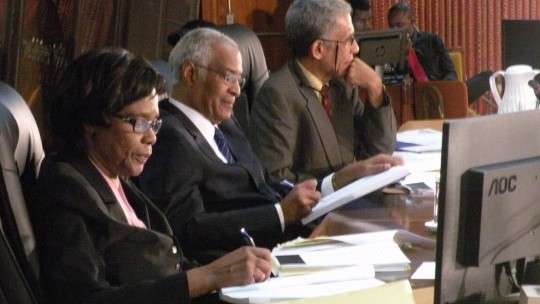 The leadership of the security forces in May 2010 have been condemned by the West Kingston Commissioners for their management of the operation to capture Christopher Dudus Coke.

The Sir David Simmons-led Commission has described the then leadership of the Jamaica Defence Force and the Jamaica Constabulary Force, JCF as incompetent.

The Commissioners in a blunt assessment said both former Police Commissioner, Owen Ellington and former Chief of Defence Staff, Stewart Saunders, should be barred leading any such future operation if they were not retired.

The report was tabled in the House of Representatives this afternoon by Justice Minister Delroy Chuck.

Sir David, Professor Anthony Harriott and Justice Hazel Harris have delivered a devastating critique of how the security forces conducted themselves in West Kingston in May 2010.

They’ve indicted the leadership of both the JDF and JCF.

The Commissioners say they find credible the allegations of extra-judicial killings leveled at members of the security forces during and following the West Kingston operation.

Sir David Simmons and his team noted that most of those accusations were leveled at Police personnel who entered Tivoli Gardens on the afternoon of May 24, 2010.

The report says it has been discovered that the units which have been accused of the unlawful killings belong to the mobile reserve division of the Constabulary Force.

According to the report, “senior members of the security forces were identified as being in dereliction of duty or were administratively and operationally incompetent.”

The West Kingston Commissioners say recommended that those officers should never again be allowed to lead or otherwise participate in internal security operations.

They identified the current Head of the Police Area 1, Assistant Commissioner Winchroy Buhdoo as among officers are guilty of dereliction of duty and incompetence.

ACP Buhdoo was boss of the Mobile Reserve at the time.

The report says Budhoo was an unconvincing witness during his testimony at the Enquiry.

According to the Commissioners – the only reasons they’ve not also recommended the same for the then Chief of Defence Staff, Colonel Stewart Saunders and retired Police Commissioner Owen Ellington is because they’ve left the security forces.

The Commissioners say they’ve also not recommended that retired Assistant Commissioner Granville Gause and Head of the JDF Mortar Unit Major Warrington Dixon be barred from internal operations because both men have also retired.

In their parting shot – Sir David and his team stated that in their judgment – Owen Ellington should have been held administratively accountable for weak superintendence of the JCF in May 2010.”

The report also disclosed that it has found that at least two persons were killed by the reckless use of mortars in Tivoli.

JDF personnel who testified at the Enquiry had alleged that the mortars were used only for the purpose of disorienting thugs in West Kingston.

The Commissioners say they find evidence given by Deputy Police Commissioner Glenmore Hinds about the total number of firearms recovered during the West Kingston operation to be – “rather confusing if not inaccurate.”

The Commissioners have also reported that they accept that negotiations, along with legal and Constitutional issues caused a delay in the progress of the extradition request for Christopher Coke.

Sir David and his team commented that Bruce Golding who was Prime Minister of Jamaica in 2010, was clearly was in a position of conflict.

The Commissioners say Golding was Prime Minister and Minister responsible for Defence.

The note that in 2010, Mr. Golding was also – “Christopher Coke’s MP and leader of the political party to which Coke was wedded.”

The Commissioners also commented on Mr. Golding’s decision to make a national broadcast where he announced that the Government would signed the extradition request for Coke.

Sir David and his team say they’ve found that Mr. Golding’s announcement may have given thugs time to prepare for the security forces operation because it was made prior to Golding alerting the leadership of the JCF and JDF about the broadcast.

However – the Commissioners say they’ve made NO adverse findings against Mr. Golding because it was a matter of Judgement and the former Prime Minister accepted the possible consequences his timing of the announcement may have had.