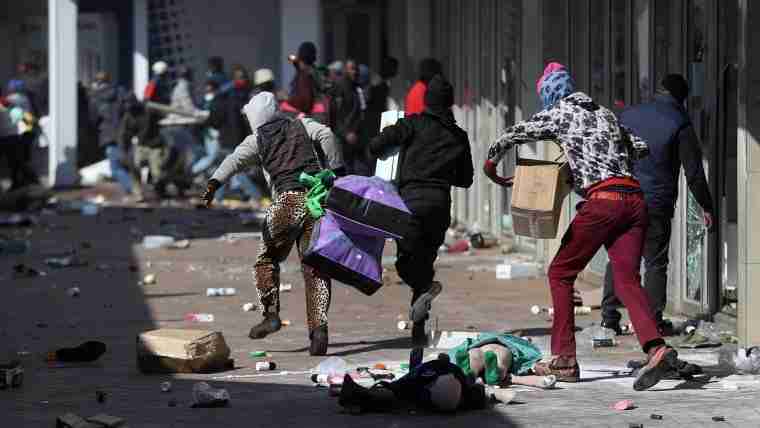 The number of people killed in days of protests in South Africa jumped to at least 72 on Tuesday as soldiers and police on the streets struggle to quell some of the worst looting and violence the country has seen in years.

Protests erupted last week as former President Jacob Zuma turned himself in to authorities to serve a 15-month jail term for contempt of court.

Wayne Walker has more in the international report.

Police Ministry spokesperson Lirandzu Themba told CNN that among those killed in the violence were 10 who died in a stampede in the township of Soweto.

More than one thousand people have so far been arrested.

Soldiers patrolled the streets of Johannesburg in armored personnel carriers today, holding rifles with live ammunition as the military worked to gain some sense of order.

On Monday, President Cyril Ramaphosa addressed the nation and announced that the military would be deployed to help the police restore calm to the provinces impacted.

The president called it some of the worst violence witnessed in South Africa since the 1990s, before the end of apartheid, with fires set, highways blocked and businesses and warehouses looted in major cities and small towns in KwaZulu-Natal and Gauteng provinces.

South African police said that they had identified 12 people suspected of provoking the riots, and that a total of 1,234 people had been arrested.

One of the highlights on another day of rampage  was the sight of a child being thrown from a high rise building by the mother after the building was set ablaze.

The child was caught by a crowd of people who rushed to help d to get ladders to help other residents, including children, escape those trapped in the apartment block in the central business district of Durban.

The mother was reunited with her baby.

More than 200 shopping malls had been looted by late Monday.