Sturridge Speaks : Time to Step Up at Liverpool Football Club 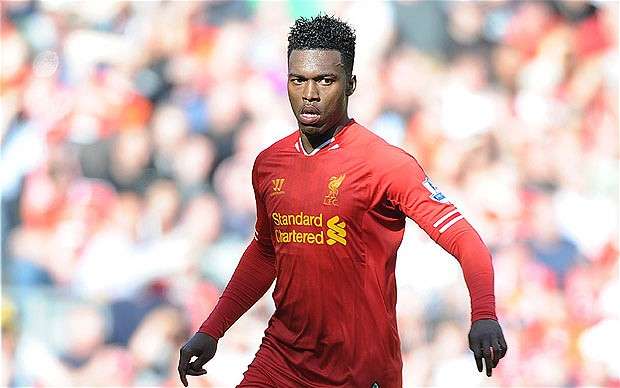 As the reality of Luis Suarez’s departure from Liverpool FC begins to settle into the consciousness of those at the club, the fans, coaching staff and players alike must be asking themselves the same question; how do we cope?

After a season that sought to defy the odds; breaking all kinds of scoring records, Liverpool’s ideal scenario would have been to keep their scintillating front line in tact, and supplement it with fresh faces ready to take on the new campaign. Fans were already salivating at the possibilities of what Sturridge and Suarez – the re-constituted SAS – could do in the 2014-2015 Champions League. Yet, with news of Barcelona’s £75m acquisition of Suarez, those salivating tongues have gone momentarily dry.

For Daniel Sturridge, however, the break-up of Europe’s most successful strike partnership of the 2013-2014 season brings with it an opportunity. Sturridge insists that persons who may have been in the mercurial striker’s shadow will now emerge.

“People have to step up. When stars leave – as they call them – there’s a new ‘star’ born. So there’s a lot of players who could take that mantle piece. It doesn’t really matter anyway because it’s a team game and regardless of whether a star leaves it’s always a team game,” Sturridge explains.

One player he sees as picking up the mantle is his young compatriot, Raheem Sterling. Sturridge says the coming season could be a definitive one in his friend’s young career, “It’s gonna be great. Raheem is a young player but he’s got a lot of talent that people don’t get to see as well. Sometimes he’s been on the bench and sometimes he’s gotten chances, but he’s still young and still improving. I’m happy that he’s improving and doing what he does best. He comes back home just like I do and represents Jamaica even though we play for Jamaica.”

Sturridge remains unfazed by talk that he should assume the coveted Liverpool number 9 jersey. Responsibility will almost definitely fall to him to lead Brendan Rodgers’ strike force, and with the departure of Iago Aspas on season-long loan to Sevilla, fans genuinely believe the time has for Sturridge to pull on the iconic shirt. “It’s not [important]! My name is Daniel Sturridge, I’ve got 15 letters in my name and that number has been good to me. The number 15 has been very good to me. I’ve never been obsessed with being a specific number. When I was younger I wanted to be number 10 or 8. As you grow up, you don’t get that number because you’ve got stars ahead of you and they’ve got that number and you have to wait your turn. But I suppose I’m at a stage where I can select a number… ”, he explained.

When pressed, the striker admitted that if asked by the gaffer, he’d consider it, “I guess he probably will offer it to me but I don’t think I will. I don’t know. I can’t say I’m gonna say ‘no’ now. You never know how I’ll feel with my family and what they’ll say. I think it will be a collective decision but if I was offered the shirt, you never know, maybe I would take it, I don’t know.”

Meanwhile, the second annual Daniel Sturridge Foundation Family Fun Day was a resounding success. Launched in 2013, the foundation partnered with telecommunications giant, Digicel, to stage a community six-a-side competition as well as a treat for children on a whole host of communities. This year, the hope was to have 30 teams from three age groups competing for trophies, cash and other prizes. Little did they know that well over 100 teams from communities across Kingston, St Andrew and St Catherine, would turn out from before the slated 10am kick-off to vie for the top prize.

Sturridge insists that maintaining a strong connection with his roots is very important to him. It is this strong sense of connection that drives him to give back to his homeland.

“It means a lot to me to give back to the community; to try and give them an enjoyable day. For me it means so much because my ancestors are here, my roots are here. My family has made a lot of sacrifices. I’ve got a lot of grand uncles and aunties and cousins still living in Jamaica. When I come here with my family its like I’m back home.  The culture and everything about Jamaica is engrained in my body so to put on a day like this is a pleasure for me,” he said.

Sturridge and his family also helped put smiles on the faces of the sick at the Bustamante Hospital for Children, by donating a brand new Play Station 4 for their games room. He’s also helping to improve other facilities at the children’s hospital, so as to ensure the time spent there is that much more bearable.

At a time when footballers are berated in several for living lavish lifestyles, it’s good to know that Daniel Sturridge is not only leading the line in scoring goals for Liverpool Football Club; but also stepping up scoring some crucial goals for charity too.

Click on an image to get a gallery view. 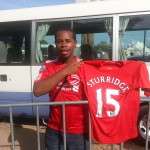 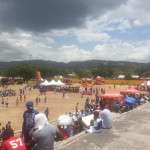 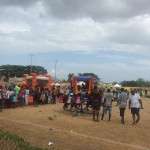 A section of Sturridge’s funday 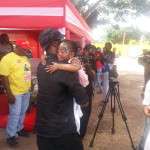 Sturridge with a child at his funday 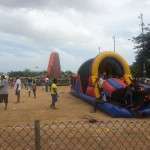 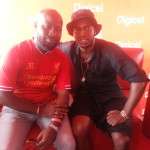