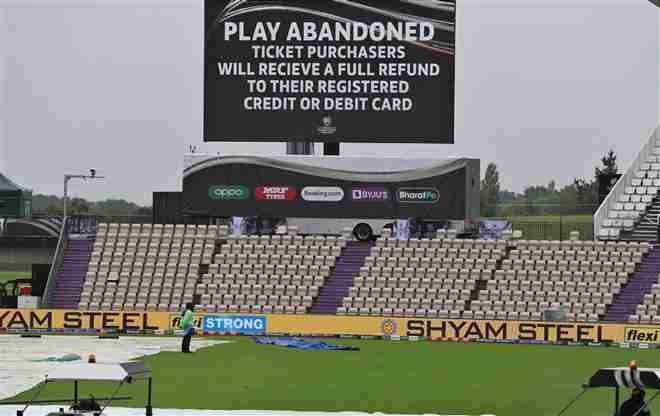 India and New Zealand were frustrated by the weather again as another day of the World Test Championship final was completely washed out by rain.

Persistent rain hung around throughout the fourth day in Southampton until the abandonment came.

A reserve, sixth day is in place so two days remain but a draw is now the clear favourite for the inaugural final.

Were that to happen, India and New Zealand would be crowned joint winners and would share the 1-point-7-million pound sterling prize money pot.

When play does restart, New Zealand captain Kane Williamson will be 12 not out, while Ross Taylor is yet to score, having faced two balls before bad light curtailed day three.

New Zealand’s best hope of victory would be to bat once, going beyond India’s first-innings total of 217 and then bowl their opponents out on the final day.

India, buoyed by the wicket of Black Caps opener Devon Conway late on Sunday, are likely to need more quick wickets on Tuesday to have a chance of winning.