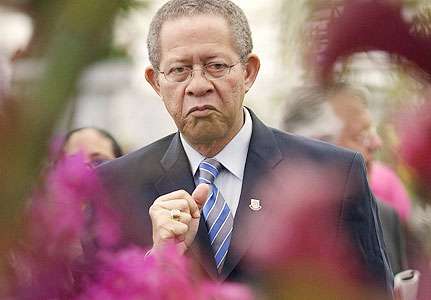 Mr. Golding is questioning the moral authority of the United States to punish Jamaica over alleged cases of human rights abuse.

He’s sharply criticized the U.S. for having a long history of bombing other countries, resulting in the deaths of many innocent civilians.

The former Prime Minister has also chastised the international community for its silence regarding the heavy-handedness of the United States use of drones in several sovereign countries.

Speaking with Cliff Hughes on Power 106 this morning, Mr. Golding lashed the US for its drone strikes against alleged terrorists.

But, Mr. Golding says his criticism goes beyond the activities of the US.

He’s also angry about what he says is the ‘silence of the entire international community’ about the atrocities of the United States.

AND, Mr. Golding says he doesn’t believe there’s any evidence that outgoing Police Commissioner, Owen Ellington, was involved in human rights abuses or failed to take action against those who carried out extrajudicial killings.