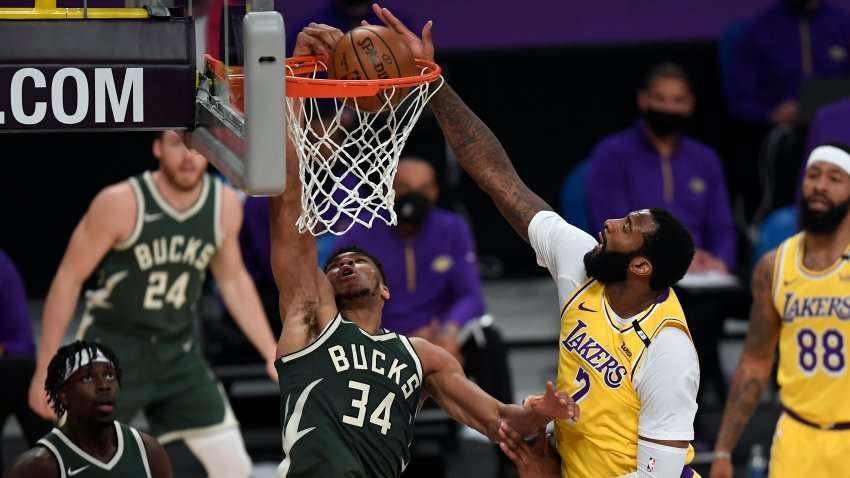 The Milwaukee Bucks ended a three-game losing streak with a 112-97 victory over the Los Angeles Lakers, who lost debutant Andre Drummond to injury.

Jrue Holiday scored a game-high 28 points for the Bucks, while Giannis Antetokounmpo finished with 25 points and 10 rebounds.

Drummond had scored four points, one rebound and two assists in 14 minutes before injuring his right foot.

The Brooklyn Nets also suffered an injury concern in their 120-108 win over the Houston Rockets, with James Harden leaving the game because of tightness in his right hamstring.

Harden posted 17 points, eight rebounds and six assists before exiting in the third quarter for the Nets, who climbed to the top of the Eastern Conference for the first time since April 2003.

The Minnesota Timberwolves come from 13 points down to beat the New York Knicks 102-101.

Mike Conley scored 26 points and had seven assists to lead the Utah Jazz to a 111-107 win over the Memphis Grizzlies and the Miami Heat beat the Indiana Pacers 92-87.

The Portland Trail Blazers win 124-101 at the Detroit Pistons, while the Dallas Mavericks claimed back-to-back victories against the Boston Celtics, winning 113-108.

The Sacramento Kings’ five-game winning streak was halted after they lost 120-106 to the San Antonio Spurs, while the Oklahoma City Thunder ended their three-game run of losses with a 113-103 victory against the Toronto Raptors.