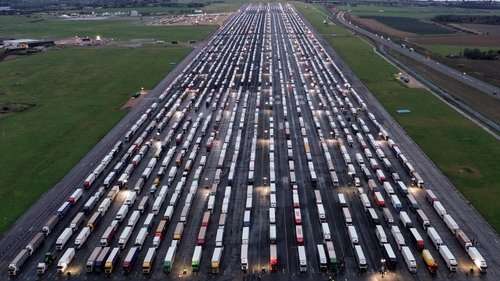 BBC: France will start letting traffic from the UK back in from Wednesday after the nations reached agreement over their shared border, closed amid concerns over a new coronavirus variant.

Freight drivers and some passengers, including EU citizens, will be among those allowed to return – if they have a recent negative test for the virus.

Some 2,850 lorries have been stuck in Kent since the border shut on Sunday.

NHS Test and Trace staff and the military will be deployed for testing.

Planes, boats and Eurostar trains will resume on Wednesday morning.

Under the agreement between the two countries, admittance to France will be granted to those travelling for urgent reasons, including hauliers, French citizens, and British citizens with French residency.

But in order to travel, they will need to have received a negative test result less than 72 hours before departure.

Rapid lateral flow tests, which can detect the new strain and give a result in about 30 minutes, will be used rather than the 24 hours required for so-called PCR tests.

The drivers will receive the result by text message, and this message would give them the right to cross the Channel.

A “protocol is still being finalised” to work out what to do with those drivers who test positive, a government source told the BBC.

In an interview with broadcasters, Mr Shapps said enough tests had been sent to Kent to test all those who wanted to return by Christmas, but suggested it could take until Christmas for congestion to be relieved near ports.

Mr Shapps warned hauliers against travelling to Kent until further notice to alleviate congestion at ports.

He said: “I am pleased that we have made this important progress with our French counterparts this evening. This protocol will see the French border reopen to those travelling for urgent reasons, provided they have a certified negative Covid test.

“We continue to urge hauliers not to travel to Kent until further notice as we work to alleviate congestion at ports.”

The arrangement agreed with the French government will be reviewed on the 31 December, but could run until 6 January, the Department for Transport said.

The French government will also carry out sample testing on incoming freight to the UK.