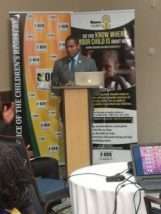 State Minister in the Ministry of Education, Youth and Culture, Floyd Green, says there’s been declines in both the number of children going missing and the number of those missing who’re found dead.

He says one of the reasons for the decline is the effectiveness of the Ananda Alert system introduced in 2009 to help to broadcast the information of missing children.

Mr. Green says there’s a 50-percent decrease in the number of children who are found dead after being reported missing.

Minister Green was speaking Mondayday at the launch of the Ananda Alert on Facebook Partnership at Courtyard Marriott Hotel in New Kingston.