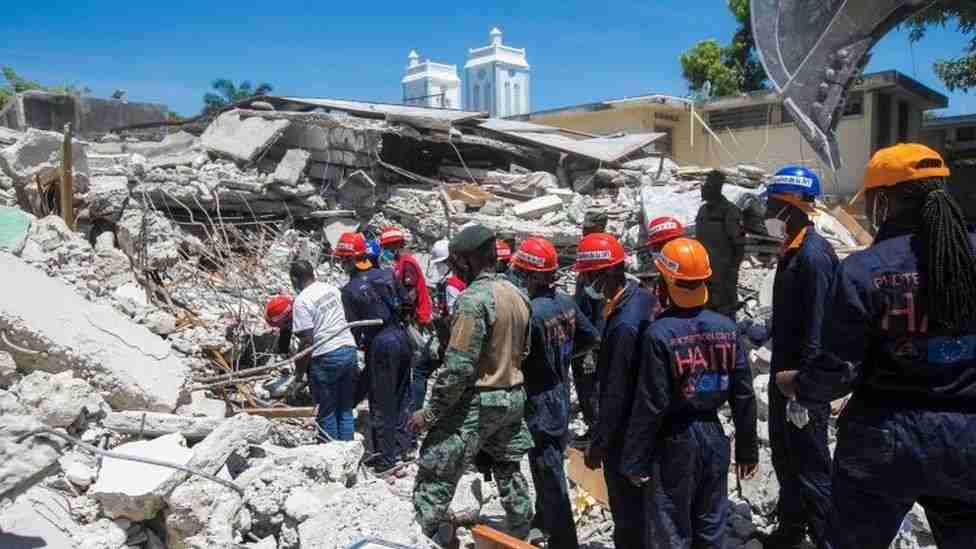 Haitian citizens and rescue workers are busy today trying to find survivors of Saturday’s earthquake as aftershocks continue and a tropical depression heads towards the Caribbean nation.

The 7.2 magnitude earthquake has left more than 1200 people dead and an unknown number are still missing.

Vice President of the Southeastern Chamber of Commerce in Haiti, Dr. Frantz Large while speaking on Nationwide this morning painted a picture of the devastating situation in Haiti.

The VP himself while he was live on air also had a moment of a scare when his home started to shake.

That was Dr. Large during an aftershock this morning in Haiti as he was being interviewed by Nationwide’s Danielle Archer and Abka Fitz-Henley.

There’ve been several aftershocks in sections of the disaster-plagued country following the massive shallow quake that struck at about 8:30 am on Saturday.

Many citizens remain on alert for further tremors.

Dr. Large says they’ve been sleeping outside to avoid going into their homes where the structure is now compromised.

Others have simply lost their home.

Dr. Large revealed that one in every two homes in the affected areas have been destroyed.

The areas most affected were Les Cayes and Jeremie.

He says the hospital in Jeremie collapsed.

The country has set up a temporary medical facility in the Port-au-Prince airport.

Meanwhile, Dr. Large fears that the rains from tropical depression Grace are coming and could make things worst for those without shelter.

Meanwhile, Dr. Large says the people of Haiti are in need of clean water and security to safely get the injured from the affected areas.

He revealed that the gangs in certain areas have been kidnapping wounded people.

Dr. Frantz Large, Vice President of the Southeastern Chamber of Commerce in Haiti.