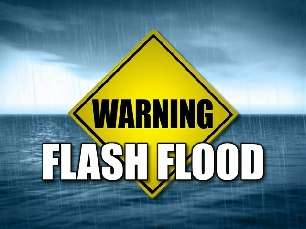 The Met Service has continued the flash flood warning for low lying and flood prone areas of Portland, St Mary and St Ann until five this afternoon.

Low lying and flood prone areas of all other parishes are now under a flash flood watch.

A flash flood warning means flooding has been reported or will occur shortly.

The Met Service says a trough currently across the central Caribbean continues to produce unstable weather across Jamaica.

The trough is expected to linger until Saturday and will continue to influence the weather across the island during the period.

The Met Service says satellite imagery and radar reports indicate that areas of light to moderate showers with thunderstorms are forecast to move across Jamaica today, affecting sections of all parishes.

The forecast is for periods of light to moderate rainfall and thunderstorms to affect all parishes.

Central and eastern parishes will be most affected this afternoon and into Saturday morning.
–30–