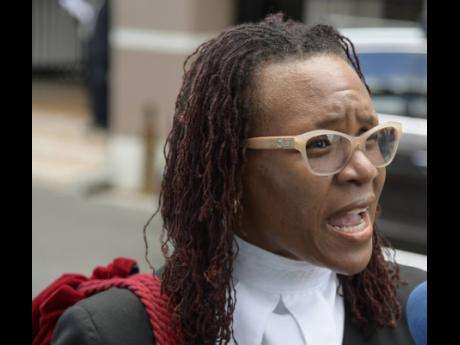 Former Deputy Director of Public Prosecutions, Queen’s Counsel Caroline Hay, has admitted that she faced political pressure to drop the prosecution of the Trafigura political scandal which rocked the PNP administration 15-years ago.

The former senior prosecutor was reacting to yesterday’s ruling out of the UK-based Privy Council which mandates five senior members of the Opposition People’s National Party must give evidence in open court regarding the 15-year long Trafigura scandal.

Mrs. Hay was the first prosecutor to deal with the matter.

The senior attorney says at several points during the handling of the case, persons attempted to exert political pressure in an effort to have her drop the matter.

She relays one particular conversation which she says made her uncomfortable.

Mrs. Hay says she was also called an overzealous prosecutor for diligently pursuing the matter.

She says at some points she felt unpopular and alone.

While admitting that she did not face direct threats, the Queen’s Counsel says the decision to proceed against the senior politicians was a difficult one.

Mrs. Hay says her courage to handle the matter was strengthened as she had the support of the Office of the DPP in dealing with the matter.

Despite this support, the senior attorney says the task was daunting.

She was speaking last evening during Nationwide at 5 with Cliff Hughes and Tyrone Reid.

Meanwhile, Queen’s Counsel Hay is hailing the Trafigura ruling out of the Privy Council as a positive sign for the independence of the Jamaican judiciary.

The Queen’s Counsel says the administration of justice has been well served by the ruling of the Law Lords.

She’s reminding public officials that their actions must always be able to withstand judicial or other scrutiny.

Mrs. Hay says the ruling reinforces the importance of transparency in Jamaica’s democracy.