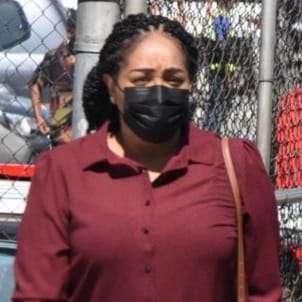 Former senior manager at National Commercial Bank, NCB, Andrea Gordon, who pleaded guilty to swindling $34 million from the bank, was sentenced to a total of seven years and six months in prison this morning.

The 52-year-old Gordon was sentenced to five years and four months on three counts of larceny as a servant.

Two years and 11 months on three counts of access with intent to commit an offence.

And seven years and six months on seven counts of engaging in a transaction involving criminal property.

The sentences are to run concurrently.

Gordon pleaded guilty in April and was remanded.

It was discovered that Gordon transferred money from NCB’s internal system to her personal accounts and to her family members as well as accounts belonging to customers.

When confronted about the embezzlement, Gordon told investigators that she took the money to assist a relative who had cancer and also because she was going through financial difficulties after she started building her home in 2017.

The court had heard that NCB had linked $111 million in suspicious transactions to Gordon.

However, the indictment on which she was sentenced only accounted for $34 million over the period 2017 to 2020.

Gordon, who worked at NCB’s Atrium headquarters, was employed to the bank for 30 years. At the time of the offence was earning $11.1 million per year.