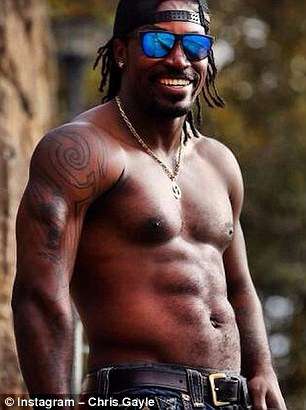 Britain’s Daily Mail newspaper has published an article tracking what it says is a history of sexist behavior of Mr. Gayle towards women.

The article shares an audio insert of three unnamed female journalists talking about their unpleasant encounters with the man rated by many as the best batsman in the Twenty-20 version of the game.

One of the women is heard describing Chris Gayle as creepy.

The article follows his inappropriate comments to an Australian female reporter, during an interview on Monday which has sparked a global media story.

The Daily Mail’s headline screams : “Debauchery, scantily-clad women and a ‘strip club’ in his BEDROOM: Inside the surreal world of Chris Gayle – and why his sleazy pass at Mel McLaughlin was hardly surprising from a man who calls himself the ‘Universe Boss’.

The article has several pictures of Gayle, in suggestive poses with various females and even has a picture of him lying in bed and using his phone to take snaps of the mirror above his bed.

It also speaks about the dancing pole he has in his bedroom.

It digs into his social media history to reproduce what it says are controversial tweets or Instagram messages posted by Gayle.

The article quotes a 2013 post made by Gayle, that says, ‘Play with her Boobs not her feelings.’

It also cites an incident in 2014, when he made inappropriate comments to a journalist from the Antigua Observer newspaper.

The female journalist asked Gayle, ‘How does the pitch feel so far in terms of the training and the weather?’.

Gayle responded, ‘Well I haven’t touched yours yet so I don’t know how it feels’.

The article says he was condemned by a women’s rights group in Jamaica.

The article also uses an audio clip from three unnamed female journalists, talking about their run ins with Gayle.

The Daily Mail article concludes that it’s clear that Gayle spends much of his time thinking about sex and parties.

And Mr. Gayle has responded to the latest allegations. He has strongly denied
indecently exposing himself to a woman during last year’s ICC World Cup in Australia.

The woman reportedly went into the West Indies dressing room at a time she felt it was empty.

She reportedly saw Mr. Gayle and another player standing in the dressing room.

It’s alleged that Mr. Gayle dropped the towel he was wearing and asked the woman, “are you looking for this?”

Gayle’s agent, Simon Ateri, has threatened legal action against the Australian newspaper which published the story.