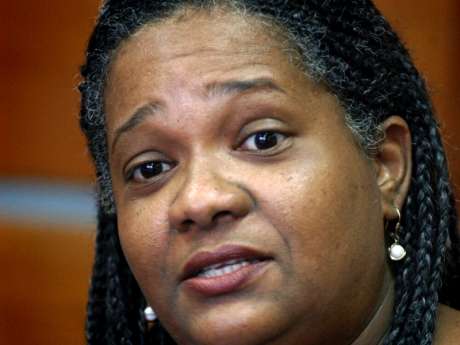 The Aide to the Leader of the Oppostion, Sharon Hay-Webster, is rejecting allegations leveled against her by MP for North East St. Catherine and fellow JLP Member, Gregory Mair.

Yesterday, Mr. Mair sent a letter of complaint to party Chairman, Robert Montague claiming that Mrs Hay Webster was interfering and campaigning in his constituency.

Mr Mair warned that he’d unleash everything in his political arsenal at Hay-Webster if she insisted.

But Mrs. Hay-Webster tells Nationwide this afternoon that the allegations by Mr. Mair are gravely disappointing and untrue.

In his letter to the JLP Chairman, Mr. Mair said Mrs. Hay-Webster has been meeting with constituents in an attempt to de-stabilize his political organization.

Mr. Mair said he was therefore advising Mrs. Hay Webster to leave the constituency and to abandon her “political suicide mission”.

According to Mr Mair, if Mrs Hay-Webster does not comply he’ll unleash everything in his political arsenal in her direction.

But reacting this afternoon, Mrs. Hay Webster said she’s surprised and deeply disappointed at the allegations.

Mrs. Hay-Webster is insisting says she has NOT been campaigning in North East St. Catherine.

She says during her regular visits to the area over the years she has offered guidance where requested and where she can as a citizen.

Mrs. Hay-Webster says she has not broken the rules.

Mrs. Hay-Webster says her interest is to see the development of her family and the people of North East St. Catherine; and to contribute to the JLP’s mission of moving Jamaica from poverty to prosperity.

She says she await’s the party’s directive on the matter.