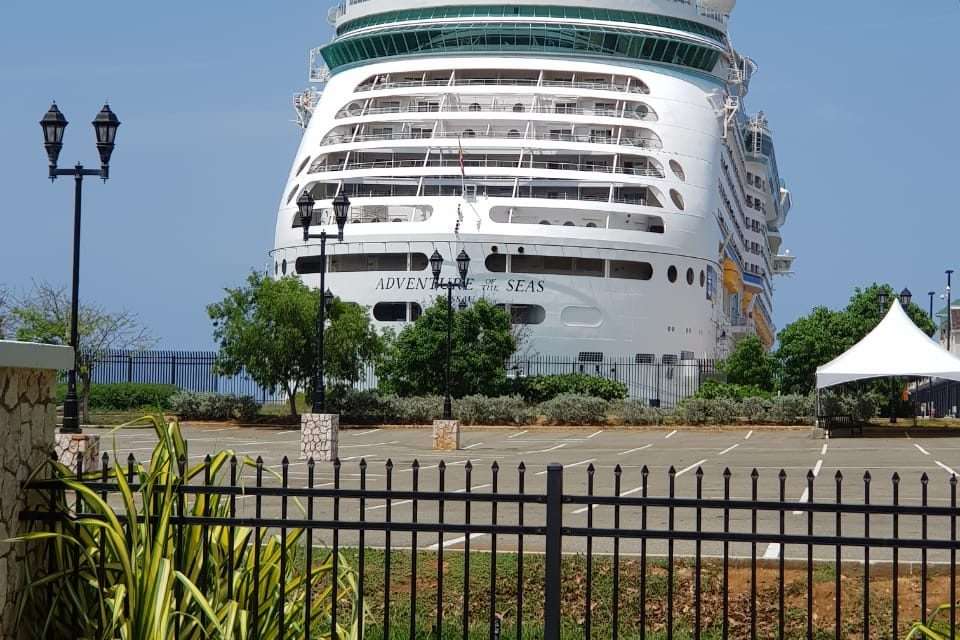 More than one thousand Jamaican crew members aboard the Royal Caribbean Adventure of the Seas will be spending their first night in months on local soil, even as they remain aboard the ship that brought them here.

Several of the Jamaicans waved flags and at least ten of them broke out singing the National Anthem, as the ship carrying them came portside, at Falmouth Pier.

The one thousand and forty-four crew members arrived onboard Royal Caribbean Adventure of the Seas that docked shortly after noon at Falmouth Pier.

Cheers went up among a small group of people, just before noon when the ship with a capacity of nearly 5 thousand came into view.

Some had been waiting for hours, to welcome friends and relatives.

About two dozen people, mainly relatives and colleagues of crew members were at the pier hoping to meet the returning Jamaicans.

The main gates to the pier were kept under tight security by members of the JDF and police force.

Head of the Western Regional Health Authority, Errol Green told journalists outside the gate of the pier that there’d be no processing today and none of the passengers would disembark.

He said the time was needed today to arrange the systems to properly receive the returned Jamaicans.

Health officials and JDF crew went back and forth to the pier but no senior Government official was seen.

They’d come to see that the Jamaicans on board were being treated properly and systems were in place to facilitate them.

Among those waiting outside was a crew member who’d come home in late February.

Mr Holt told Nationwide News he was in touch with some of his colleagues on board the ship and they were happy to be home.

Joan Spence journeyed from Portmore, St Catherine to meet her three sons who she says are on board the vessel.

She says she wanted to take them home as they’ve been on RCL ships for more than two months.

She says they’ve been under quarantine since March 24 and there’s no need for further quarantine.

But several like Ms Spence left Falmouth disappointed at not seeing their relatives or friends.

They’re comforted only by knowing the men and women were home again.